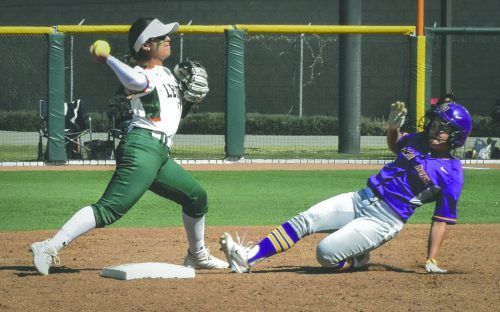 Junior second baseman Michelle Deguzman forces Cal Lutheran freshman left fielder Marissa Alfaia out at second base in the first game of a doubleheader Saturday. The Leopards dethroned the Regals, 7-1, in the first game and 8-5 in the second game at Campus West. / photo by Maydeen Merino

With the pair of wins the Leopards remain in first place in the Southern California Intercollegiate Athletic Conference with a record of 5-1 and 9-3 overall.

“The neat thing about our girls is that when their backs are against the wall they bite back,” head coach Julie Smith said.

The Leopards got on the board in the bottom of the first inning of game two when junior second baseman Michelle Deguzman hit a solo home run to left center field.

The momentum took a turn in the top of the second as Cal Lutheran drew a walk to start the inning off starting pitcher Katheryn Navarro. She then struck out the next batter and gave up a single to center field. On a full count sophomore pitcher Brittany Workman hit a three-run home run to left field to give the Regals a 3-1 lead. Navarro would strike out the next batter to end the inning.

The Regals added more runs in the top of the third inning. Senior third baseman Olivia Leyva then homered to right field to extend Cal Lutheran’s lead to 5-1.

Senior Ashley Caro came in for Navarro and got two outs to get the Leopards back in the dugout.

Junior outfielder Rachel Ogata led off the bottom of the third with a walk. Junior outfielder Carly Condon also drew a walk to put two on with no outs. Deguzman lined a pitch into center for a single to load the bases.

Sophomore shortstop Shelby Tevis was hit by a pitch, and that brought in a run to make it 5-2, with nobody out. Navarro then hit a sacrifice fly to left field to make it 5-3.

After Tevis stole second, there were two on and one out for senior catcher Angelica DeAngelo. Fouling some pitches off, DeAngelo took a pitch that was down and drove it over the fence in center field for a three-run homer to give the Leopards a 6-5 lead.

“I was just looking for my perfect pitch. We had runners on and I knew we needed to score,” DeAngelo said. “It was really low, and I honestly have no idea how I got to it.”

Once the Leopards took the lead, they would not give it back up. Caro continued her strong relief effort and did not allow any runs while facing 10 batters.

“I’m not trying to do anything special,” Caro said. “I’m trying to get the ball in play and to my defense, I trust them.”

The Leopards’ defense was critical. The Regals had opportunities to score, but great plays made by multiple Leopards kept them off of the board. In the top of the fourth Ogata made a diving catch on a line drive to end the inning, stranding runners on second and third.

In the top of the fifth inning, with runners on the corners and one away, sophomore third baseman Justice Borden started a double play that got them out of that inning. The defense played big and the relief pitching was just as good.

Freshman Jiana Rojo came in to close out the game for the final two-plus innings and did not allow any runs. She picked up her first save of the season.

“It was huge to sweep and get another two wins under our belt,” Rojo said.

La Verne continues conference play with a doubleheader at noon Saturday at Pomona-Pitzer.