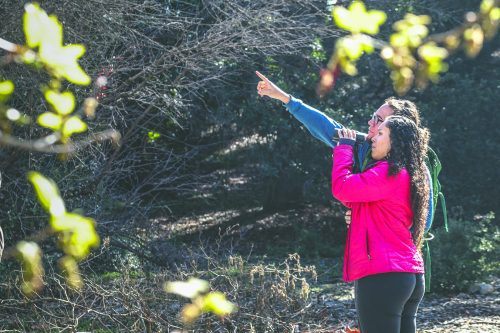 Alexander Boice points out a Psaltriparus minimus, commonly known as a bushtit, to Rocio Centeno during their first bird walk Sunday at the Rancho Santa Ana Botanic Garden in Claremont. The free family bird walk is held the first Sunday of every month, sponsored by the Pomona Valley Audubon Society. Each group commonly sees at least 20 different bird species. / photo by Katie Pyne

Entering the garden, observers can expect to see bright colored birds along with rare and exotic plants like the Simmondsia Chinensis or Jojoba, and a palm oasis that fills the pathway to Indian Hill Mesa, which was once inhabited by the Serrano Tribe.

The garden offers a limited number of free binoculars to give visitors a close-up view of the birds.

The bird walks have been going on for 15 years for the public to see California native birds and are currently offered on the first Sunday of every month.

Tour guide Ken Burgdoff, a bird watcher for 30 years, can identify every bird he sees by color, the sounds it makes, and what type of beak it has.

“I got into birding when I went to Africa with my dad and saw so many elephants,” Burgdoff said. “They were all the same type of elephant. I could not name all of them and I looked at it as a challenge.”

Many smaller birds, such as the California lesser goldfinch, with its bright green and yellow colors, fly around the landscape of California fan palms.

Loud caws can be heard from a red tail hawk that flies between branches, giving spectators below a show.

“Easiest way to tell if it’s a red tail hawk is because of the light brown color it has along with the sound that it makes,” Burgdoff said.

Rancho Santa Ana was established in 1927 by Susana Bixby, who originally started a garden in Los Alamitos. Bixby moved to Claremont with her father to start the garden, originally intended for research, but turned into a location where the rarest of California plants could grow.

“We have a nursery where you can purchase some of the plants that we grow here,” nursery employee Daniel De Santiago said. “The ones in the garden are grown here but not for sale.”

Kiosk attendant Leslie Husa has worked at the Garden for over 10 years.

“We always had the bird walks turn out successful,” Husa said. “Families bring their kids to explore the garden and purchase our plants.”

The garden offers concerts in the summer, a butterfly pavilion throughout the month of April and cocktails made with native plants periodically.

“The atmosphere here is great,” front desk receptionist Vanessa Ortega said. “We have had several weddings here besides the events that we offer. I love being in nature.”

The Garden hosts a free bird walk from 8 a.m. to 10 a.m. on the first Sunday of each month, September through June.

Rancho Santa Ana Botanic Garden is open daily from 8 a.m. to 5 p.m. Admission is $9 for adults and $6 for students with school I.D.