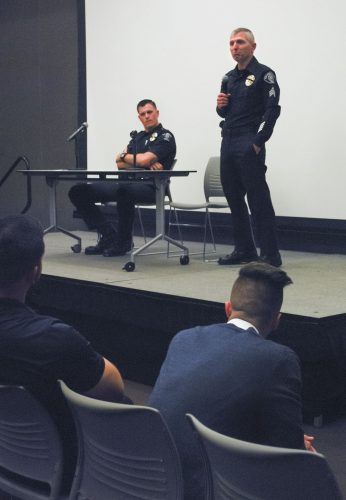 Alumni Nicholas Franco and James Cockrell watch as Baldwin Park Police Officer Andy Velebil, a La Verne alumnus, and La Verne Police Department drug recognition expert David Weaver speak to a full house about the dangers of driving under the influence Monday in the Campus Center Ballroom. Phi Delta Theta’s DUI Awareness Night was created by Cockrell, who graduated in 2017, in memory of his uncle, who was killed in 2016 by a drunk driver. / photo by Natasha Brennan

In 2016, James Cockrell’s uncle died in a drunk driving crash.

Cockrell, who is a 2017 University of La Verne alumnus, honored his uncle’s life by organizing a DUI awareness event last year with the help of his fraternity brothers.

Franco shared his story of how his cousin was hit by a drunk driver.

“My family got turned upside down,” Franco said “(This is a) teaching experience that has resonated with me and my family,” he said.

Franco’s cousin survived the crash, and so did the drunk driver. Still, he said, the lesson was sobering.

Whether you have had one beer or eight beers, drinking and driving should never be an option, Franco said.

“My uncle’s wife and four daughters will forever be without a father, while the drunk driver serves only four years in prison,” Cockrell said to introduce his family story.

He said he remembers vividly being woken up by his dad who delivered the news two years ago.

“Events like tonight’s are important because there are some common misconceptions on DUI’s,” Weaver said.

One of them is that only alcohol causes impaired driving.

“(Other substances) can impair your body, and you can actually still be arrested if your blood alcohol content is below 0.08 percent if I can prove impaired driving.”

Weaver warned about the dangers of driving while under the influence of other substances, such as like marijuana, methamphetamines and prescription drugs. Any kind of substance that is put in

your body and impairs your judgement can earn you a DUI, he said.

“People need to be more aware,” Alexa Withers, sophomore psychology major, said. “I know a few people who were involved in drunk driving accidents and it’s dumb. Just be smart.”

Being on your phone while driving can be as bad a driving under the influence.

“The consequences are crazy” said Alice Ochoa, freshman psychology major. “It is better to just take an Uber or Lyft, just make sure you have a plan,” she said.