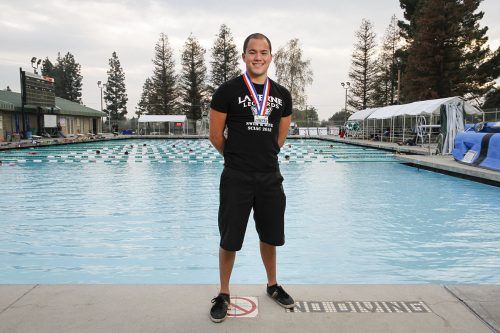 Brandon Pon, junior criminology major, began his swimming career as a freshman at Bonita high school. Pon is a record holder for the 500, 1,000, and 1,650 yard freestyle events at the University of La Verne. He says his swimming workouts and training are therapeutic experiences for him. Following the traditions of his family, Pon looks forward to a career in law enforcement upon graduation. / photo by Ashlyn Hulin

Pon started swimming his freshman year at Bonita High School. Before swim, he was interested in road cycling.

“I followed my sister’s footsteps, spiraled off into me doing swim in high school and now at La Verne,” Pon said.

Not knowing his true talent, Pon continued to do club swim, soon finding himself at La Verne.

“This has been a goal for a year. I have enjoyed watching Brandon chase this dream every single day so it was icing on the cake when he achieved the performance he had worked so hard for,” swimming and diving head coach Pat Skehan said.

He finished only a few seconds behind the leader, keeping his hopes high for the last few spots entering nationals.

“Brandon’s event in the SCIAC championships was the 1,650 and that is a task for any swimmer,” Alana Rodriguez, sophomore swimmer kinesiology major said.

“It is one of the hardest events because you must use pace and speed. In most events you are either pacing or swimming, whereas Brandon is doing both over 60 laps.”

With an exceptional time in the 1,650, Pon barely missed the cut off mark for nationals in the 1,650 just by three spots, placing him 19th in the nation for the mile.

“Brandon was thrilled that he broke his own 1,650 record again,” Sara Bartelt, senior diver and biology major, said.

“It is something he trained for all year but breaking his own record is not enough for him. He wants to be better and has even bigger goals for the upcoming season.”

Only a junior, Pon has one more year to break more school records than he already has, improving his time in the 1,650 along with the 500 and 1,000.

Summing up, the season was adventurous for Pon.

He is looking forward to getting back in the pool for next year with one goal on his mind – making it to nationals in the 500, 1,000 and 1,650-yard freestyle events.

“My season was honestly an adventure. I compare my season to ‘Lord of the Rings,’” Pon said. “At the end of the day Frodo got his ring and I got a good time. I did not make it to the afterlife like Frodo making it to the nationals, but I will work harder my last year here at La Verne making it to nationals.”

Pon will use the offseason to practice working on his endurance for his last and final year at La Verne.