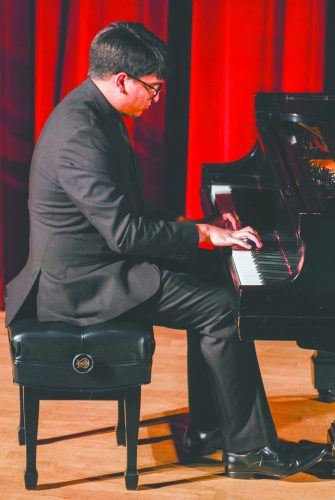 “I believe I am at a skill level where I could be a professional, but there’s no such thing as good enough,” Ramirez said. “You’re always trying to get better.”

Ramirez has played the piano since he was only 4 years old and said he has grown to love it over the last 18 years of playing.

“I try to practice every day at least three hours if I have the time,” Ramirez said.

“It’s become where it’s not so much practice, but it’s fun for me, too, to get better,” he said.

Ramirez began practicing for this recital last spring, when he signed up for senior project and was given a year to prepare.

“It’s fun to play in front of people, I’m not shy to share when I’ve learned a new piece,” Ramirez said.

Ramirez said that all songs he played during the recital, except for “Somewhere Over the Rainbow,” were learned while studying with his piano instructor, Adjunct Professor of Music Marge MohWei Chen-Hribar.

Ramirez called Chen-Hribar his biggest critic, apart from himself, and said he has learned a lot from having her as a professor.

“I have improved immensely. She’s very hard on me, but in the sweetest way possible,” Ramirez said. “It’s nice to have someone who’s honest with you.”

Lynsea Myers, senior psychology major and music minor, came to the recital in support of her friend Ramirez.

“I’m really proud to see his recital come together, he’s been working really hard on it,” Myers said. “I like the music choices, it showcased everything about him. He does jazz, classical and all in between.”

Ramirez had both family members and friends in the audience for support at his recital and he said he was satisfied with how everything turned out.

“I know these pieces take a long time to perfect,” Andrew Medina, senior music major, said. “I know he picked these out at the beginning of last semester, so he’s been working for a while.”

Ramirez said he is glad to be done with his recital and schooling, so he can focus on a band he has in the making.

He and senior music major Aaron Aranda, who plays bass, plan on creating what he calls a fusion of rock and 1970s dance music.

“He’s an awesome musician and I think he has a good career in front of him,” Lorali Mossaver-Rahmani, junior anthropology major and music minor, said.