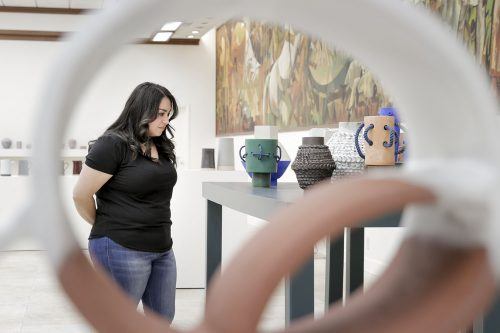 Claudia Serrano, guest experience associate at the American Museum of Ceramic Art, inspects the work of Bari Ziperstein. “Making it Work: Production by Design” features the work of five Los Angeles based artists, who use social media and e-commerce to bring their tableware and functional work to a wider marketplace. “Making It Work” is a complimentary exhibit to the adjacent “Discovering Saar Ceramics” exhibit. The exhibit runs through Sept. 18. AMOCA is open from noon to 5 p.m., Wednesday through Sunday. / photo by Spencer Croce

The American Museum of Ceramic Art in Pomona has five artists who have collaborated with architectural and ceramic skills to create their latest exhibit.

“Making It Work: Production By Design” is a complementary exhibit to the “Discovering Saar Ceramics” exhibit, also on display at AMOCA.

Saar was an ceramicist and designer whose work went unrecognized for most of his life.

Ceramic artists paid their tributes and put their own twist on his designs that are display in the exhibit today.

“It is my first day here on the job, but I am happy to show everyone around our first Saar ceramic exhibit and the one that was inspired by Saar,” tour guide Maika Kusuma said.

All five artists have reinvented their pottery skills having small pottery studios and pushing their talents to the limit of ceramic art.

Ana Henton and Mel Keedle combined both of their individual talents to create still life ceramics.

Henton used her architectural training to plan out figures that would be unique while Keedle used her pottery talents to shape the clay on the wheel with ideas from Henton.

“I did not know what to expect from the museum since it is my first time here, but I am enjoying it,” Pomona resident Gabriella Perez said. “It is very different from any other museums that I have been to.”

Ben Mandansky uses meditation on minimalism, mechanics and remasters in earthen and eternal material when creating his art.

His designs are all created with rough textures and earthly palettes in his own personal studio in Los Angeles.

Mandansky’s pieces at the exhibit are made out of speckled butt clay underlining all his pieces which he describes as “groggy sandclay.”

He said his creations represent his surroundings and point of view with a simple tactile wax with illuminating bright colors catching the eyes of viewers.

“I can see some of these pieces in my house because it looks like something similar to what I would want in my home, especially with the cups.”

Mandansky is not just a ceramist, he has ventured into fashion and created his own limited edition sneakers.

The sneakers include “tiny grey specks” which represent his stoneware clay.

The bright blue on the sole represents his use of bright colors for his pieces.

“At first I thought the shoes were made out of ceramics and I was afraid that the whole piece would crack or break,” Gabriella Perez said.

“I looked at the back of the heel and saw how he incorporated his work into the shoe and I thought that was pretty cool.”

Bari Ziperstein’s contribution to the exhibit is called “Bzippy and Co.”

She gets her inspiration from the rich ceramic history of southern California, the Cold War and finished patterns to create her artwork.

Her artwork was created in her studio in East Los Angeles where she collaborated with her assistants, and ceramic students to create her production.

Ziperstein paints people on her artwork with colors that illuminate her ceramic pieces.

Instead of having a white wall as a background in her production, Ziperstein used an earthly tone to give more color to her pieces.

Nishigawara’s used unique dinner and silverware to create his artwork.

Nishigawara used a creamy semi-matte glaze in the “W/R/F Lab” artwork and is one of his first original productions he still has today.

Cups are ordered from shortest to tallest mimicking the Japanese ceramic art setup.

“I like how he uses earth tones to decorate the cups rather than the bright colors that I saw in the other exhibit.”

AMOCA employees were excited about the reactions they got about the new joint exhibits.

“It gives you a better understanding of what the artist see through their eyes and ultimately we do not talk about art as much anymore but art education is important in our society.”

The “Discovering Saar Ceramics” and “Making It Work” ceramic exhibits will run through Sept. 16.