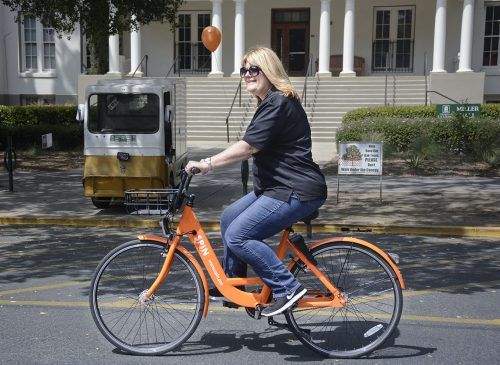 Lisa Hansgen, administrative assistant for Campus Safety and Transportation Services, enjoys a free bike ride at the Spin Bikeshare unveiling April 5. The event marked the start of Spin bike service on campus, which features 150 bikes placed at bike racks around campus. Riders can pay 50 cents for a half hour or $14 a month for unlimited rides. Spin was founded in San Francisco in 2016 and has gained popularity through bringing a dock-less Chinese-style bike sharing program to the United States. / photo by Dorothy Gartsman

One hundred fifty bright orange solar powered Spin bicycles arrived on campus April 5 in front of Miller Hall. As part of a new bike sharing program at La Verne, the wheels are available to students for 50 cents every half hour or $14 per month with unlimited use.

Spin, founded in San Francisco in 2016, offers an affordable and environmentally-friendly form of personal mobility. Each bike is equipped with solar powered lights and foam wheels to mitigate maintenance issues.

Lisa Grater, transportation services manager, introduced this program to La Verne and said she wants everyone on campus to take ownership of the program to encourage its success.

“We want to help the students of La Verne get into the city easier,” Grater said. “Hopefully once we bring Spin to campus, the city will become interested and invest in bikes for people to use in the city of La Verne.”

Once the Spin app is downloaded, anyone can unlock a Spin bike by scanning the QR code on the bike.

Students are encouraged to park the self-locking bikes back on campus at night, but can leave them around the city of La Verne.

“The bikes are housed on the University property,” Grater said.

“We ultimately would like the bikes returned to campus to show we are good neighbors to La Verne and not just leaving bikes all over the city.”

Technicians from the American Bike Patrol Services, who services La Verne’s security and rental bikes, will locate any bikes in need of maintenance or left in the city and return them to campus.

Andrew Tucker, technician for American Bike Patrol Services, explained the concept of the Spin bikes to curious students and faculty.

“The bikes are free today since we are in the process of dispersing,” Tucker said.

“Grater told the students to drop the bikes off where an orange balloon is tied up at a bike rack. Students are coming to pick up a bike, drop them off at a bike rack and come back to do it again.”

Tucker said the bikes are a more affordable and low maintenance option for students.

“The solar panels in the basket collect energy for the bike itself,” Tucker said. “The wheels are tied up to the lights, so when the bike is in motion the lights will automatically turn on.”

Tucker encourages students to wear a helmet and pay attention while riding.

“I notice people take off on the wrong side of the street,” Tucker said. “Helmets may be dorky, but they will save your life. I have had a couple incidences where I would not be alive if I was not wearing a helmet.”

Grater has looked at other alternative transportation options for La Verne like the bike library and free passes for the Foothill Transit Bus.

“We have had the bike library on campus for four years,” Grater said. “I confiscate bikes that have been left behind. I refurbish them and then add them to our library where faculty, students and staff can check out bikes to ride off campus or across campus.”

Al Clark, professor of humanities, has used his bike to get to and from campus for 21 years. He has an eight mile commute each way and is hopeful students will see the benefits that biking produces.

“Biking is a win win situation in every way,” Clark said. “Biking helps the environment, helps me personally and eases the parking problem. It does take more time, but it is a wonderful way to start the day. I am ready to sit down and teach when I get to school.”

Clark will not personally use the Spin bikeshare program since he has his own set of wheels, but encourages students to take advantage of the program.

“There are a lot of possibilities if students view this as an acceptable and fun thing to do,” Clark said. “It not only gives me an excuse for exercise every single day, but it is also the kind of exercise knees and hips like.”

Jay Jones, professor of biology and biochemistry, said people understand there is an environmental problem, but they do not internalize it.

“It kind of pains me there is not more ridership,” Jones said. “If there was more ridership there would be more people and more buses that would go more places. But we are in love with the car and that is a tragic thing.”