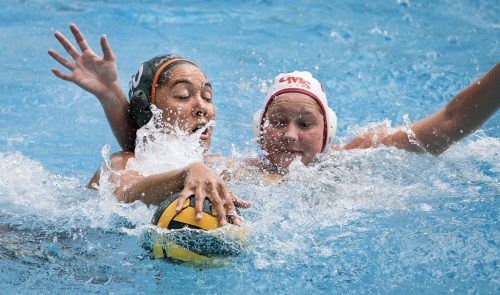 La Verne junior attacker Yuri Ujifusa struggles for the ball with Claremont-Mudd-Scripps senior attacker Jessica Gaffney during the fourth quarter of Saturday’s game at the La Verne Aquatic Center. Despite an energetic opening from La Verne, the Athenas slew the Leopards, 11-6. / photo by Spencer Croce

The Leopards started off strong, with freshman attacker Jassmine Kezman scoring a goal within the first minute. Less than a minute later, CMS scored a goal to even the game at 1-1.

La Verne played good defense in the first half, not allowing CMS many good looks when they had their defense set.

Sophomore goalie Shelby Garcia had some impressive saves, especially in break away and one-on-one opportunities.

“She is really dynamic,” head coach Pat Beemer said. “She is a good goalkeeper and she helps us stay in the game. She is a natural athlete.”

The Leopards had an exclusion penalty on junior attacker Yuri Ujifusa which allowed CMS to score another goal, making the score 2-1 at the end of the first quarter.

Fighting through the second quarter, La Verne received a foul and a turnover which gave CMS control of the ball, leading to another goal and a 3-1 lead.

“We try to stay under 10 or less turnovers during the games but once we start to see 14 or more turnovers, we get behind,” Beemer said.

La Verne kept fighting back throughout the second quarter. CMS received an exclusion by junior attacker Emily Mena which led to another Kezman goal, assisted by junior driver Victoria Mezack, making the score 3-2.

After another exclusion penalty by Mena, CMS took possession again and scored another goal, 4-2.

La Verne eventually scored another goal giving CMS some pressure. With only nine seconds remaining CMS would then add another goal, ending the half with the score 5-3.

In the second half, La Verne’s multiple turnovers let CMS pull away.

“I think during the second half the team started to over think about their shot opportunities,” assistant coach Robert Echeverria said. “I think that is what delayed the team.”

Echeverria said that if the team can limit turnovers, it has better chances in being successful in the future.

“We try to put up the same energy back, but when we don’t have enough rest, it can get a little sloppy because we’re tired,” Mezack said.

La Verne scored three more goals in the fourth period but it was not enough. The Athenas defeated the Leopards, 11-7.

“I think we got a little too much in our head, we went in with so much energy and momentum,” said Rachel Fox, junior defender.

La Verne went on to beat Caltech, 11-1, Wednesday to give them an overall record of 8-14, and 5-7 in the Southern California Intercollegiate Athletic Conference.

“I think we definitely need to communicate more in the water and not get so frustrated with ourselves,” Fox said.

La Verne will host Pomona-Pitzer at 11 a.m. Saturday then close out the season against Cal Lutheran at 4 p.m. Wednesday.

Both games will be at the La Verne Aquatic Center.