By Adonis Borer, Campus Times Editorial Board on April 6, 2018 in Editorials, Opinions 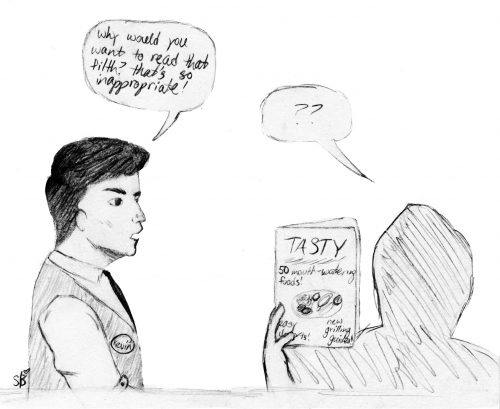 5,000 of the retail chain’s 6,300 stores will continue to sell it in the lifestyle section with other reading materials.

The change comes after heavy pressure by the National Center of Sexual Exploitation, or NCOSE, although Walmart says the decision is primarily for business reasons.

NCOSE is an organization that opposes pornography by highlighting the links to sex trafficking, violence against women, child abuse, addiction and more, according to its website.

In the age of the #MeToo movement and speaking out against sexual harassment, publicity on what or what is not considered sexual exploitation is on the tip of the social media tongue.

Cosmopolitan, widely known as Cosmo, has been sold on magazine stands since its emergence in 1965.

The women’s magazine prides itself on writing sex tips and tricks, celebrity news and gossip, fashion tips and a slew of other advice for the modern woman. The magazine covers have also been known to feature beautiful women with revealing clothing.

A magazine that challenges sexual taboos should be seen as a positive. With a culture that generally demeans sexuality and the appraisal of one being with their bodies, it should be admired that a well-known publication is breaking those boundaries.

Representatives of Cosmo are well aware of their reputation and say that this is the magazine helping to empower women.

In a statement to NBC News, the publication said that with their focus on empowerment, they are “proud of all that the brand has achieved for women around the world in the areas of equality, health, relationships, career, politics and social issues.”

A 2015 collaborative national survey by NCOSE and Wilson Perkins Allen Opinion Research, 67 percent of surveyors said the Cosmo covers are inappropriate for viewers of all ages, 55 percent of shoppers think the magazine should be removed from the view of children and 47 percent said it should not be sold to minors.

Like many other popular magazines such as People and Entertainment Weekly, whose audiences are primarily young women, Cosmo says they promote awareness for women’s sexuality.

Former Cosmo editor-in-chief Joanna Coles said in an interview with Washington Post that she did not have time for debate because she was too busy “putting out a magazine and encouraging American women to have more and better orgasms.”

This was a response to a statement by Victoria Hearst, granddaughter of William Randolph Hearst, who told the Post that God told her to “work to get Cosmo out of the hands of children.”

The publication should not be taken off the shelves for publicizing information about positive, healthy sex for women.