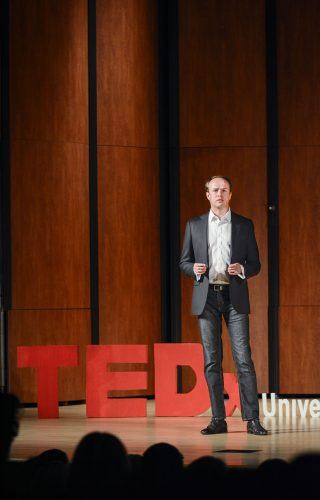 The event was curated by Flora Wong, senior communications major. She worked with the TEDx organization and various University entities to bring the event to campus as her senior project.

TED, which stands for Technology, Entertainment, Design, is a non-profit media organization founded in 1984 that posts talks online, with the slogan “Ideas worth spreading.”

TEDx events are the independent, local version, which follow the TED conference principles, including being free to guests, and not paying speakers.

The events are posted to the TEDx YouTube channel.

“TEDx is a platform to share ideas and to initiate conversations,” Wong said.

Wong said was inspired to create and host the event to bring something here where people from all over the La Verne community could broaden their minds.

“I wasn’t seeing what I wanted to do at the University, and I thought why not create it myself?” Wong said.

Wong opened the evening with thank yous to her family, the event’s on-campus co-sponsors for helping her organize the event, and her faculty mentor, Elizabeth Zwerling.

The host for the evening was intuitive coach and psychic Zach Loeb.

Loeb introduced Lising first. Lising, who is also a professor of speech communications, spoke on how ignorance of objective facts, today more than ever, fuels a lack of communication among us.

In his talk titled “6,000 vs. 13.8 Billion,” Lising explained that many of the problems we have today are due to a lack of communication and listening.

“People tend to alienate others by insulting them,” Lising said.

“There is nothing gained in that process. What we have to do is find the words necessary to articulate (ideas) so that others can understand… Rediscover your eloquence and then speak,” he said.

Challenge yourself to understand what people who don’t think like you are saying, he added.

The second speaker, Nosrati, shared a personal story of growing up female in a conservative Middle Eastern household.

She said she identified with Princess Jasmine from “Aladdin.”

But even the Princess Jasmine movie is called “Aladdin,” she said.

She talked about learning to use her voice in a culture, where women didn’t usually have a voice.

She would speak publicly and get feedback not on the content of her comments but on her clothing and her “bossy” demeanor.

Then she came up with the notion of “girl boss.”

Instead of calling little girls princesses we should call them “girl bosses,” she said, adding that that is the notion she holds dear when she faces sexism in response to her strength and outspokenness.

The final speaker was Baranowski, author of “Outsmarting the Crowd: A Value Investor’s Guide to Starting, Building, and Keeping a Family Fortune.”

“There is a great investor in everyone,” Baranowski said.

He also discussed his three secrets to success as an investor and told those interested in investing to get away from their computer screen or desk.

“It’s your world, why not own a small piece of it,” Baranowski said.

After the event, Baranowski gave autographed copies of his book to those who wanted it.

Wong was delighted with the success of the event.

“Bringing the TEDx name to campus was such a big deal for me,” Wong said. “Everyone can share an idea and provoke that conversation with someone… I hope that was accomplished tonight.”

Paulina Wartman can be reached at paulina.wartman@laverne.edu.

Correction
In an earlier version of this story, the TEDx University of La Verne event was mistakenly referred to as a TED-affiliated event. It was actually a local independent event affiliated with TEDx. The Campus Times regrets the error.