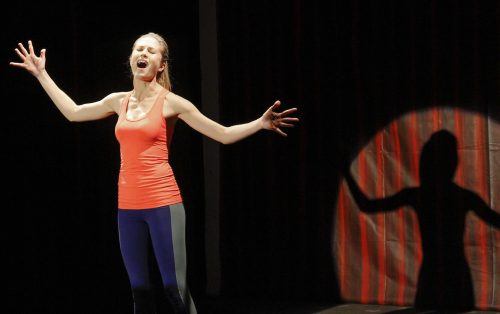 Lauren Smolka, who plays Sally Bowles in the musical “Cabaret,” rehearses the last musical number of the show before an audience of cast and crew Sunday in Dailey Theatre. “Cabaret” is set in a Berlin night club during the rise of Nazi rule in the 1930s. The play opened Thursday, with more performances at 7:30 p.m. Friday, Saturday, and May 3, 4, 5, and a special showing at 2 p.m. May 6. / photo by Ashlyn Hulin

The theater department presents “Cabaret,” a musical set in a vivacious Berlin nightclub during the 1930s when the Nazis began their rise to power.

The 1966 musical, centered at the Kit Kat Klub, is the source of many love stories found in “Cabaret.” The musical includes music by John Kander and lyrics by Fred Ebb.

Sean Dillon, professor of theater arts and director of “Cabaret,” was introduced to the musical as a young child and learned to appreciate the compelling plot as he matured.

Dillon said the musical has a couple of meaningful and bittersweet love stories that are underscored by what goes on in the Kit Kat Klub.

“‘Cabaret’ is set in the nightclub where everyone is enduring hard times, but also living life to their fullest in free and open way,” Dillon said. “Berlin is a place where you can let it all hang out, but it also talks about how the Nazis are rising to power and their days are numbered.”

Schneider believes material things serve no true value, but her philosophies crumble when aspects in her life drastically change.

“My very first song is titled ‘So What’ and describes Schneider’s life story,” Romo said. “Her philosophy is time goes on and money does not matter. She has lived through so much and will take whatever she can get.”

Romo said her confidence grew playing the role of Schneider because of the encouragement from her cast.

“I have had the most fun I have had in my whole entire life with this musical,” Romo said. “I was not confident in my singing until I auditioned and they give me the confidence to go out and sing. I know it is my passion and I have been having a blast.”

Dillon said his responsibility as a director is to act as an interpreter for the audience, therefore most of his preparation is focused on the script.

“My process as a director always starts with the text of the musical,” Dillon said. “It always involves some degree of historical research and criticism, but the primary thing is what I am presenting, what is there to be said, what do I understand to be the most important parts and how to communicate this to an audience.”

Dillon said going to see “Cabaret” will not be a chore for the audience, but rather an entertaining experience.

Briana White, sophomore theater arts major, plays the emcee who is a male character. White wanted to transform the character, usually played by a male actor, to act androgynous and care-free.

“I am female, so adapting to male mannerisms was very fun,” White said. “I changed the way I walk, my voice and my gestures. It was such a journey finding the character, but I think I have created a very interesting, fun and complex character.”

White said she wants the audience to leave the show feeling mixed emotions about the musical.

“The show is super fun, sexy and playful,” White said. “At the end of act one, you start to see the heaviness of the show. I want them to leave not knowing how to feel, because they fell in love with the characters…and at the end their hearts are broken when they realize what is going on.”

Tim Stribbel, junior theater arts major, had to adjust to his role as Herr Schultz, a widower who tries to communicate to others the true horror the fascist government has created.

“This role is different from characters I have done before, because most characters I have played are more aggressive and in the face of the violence,” Stribbel said. “Schultz is a lighter character and comedic at times which is fun.”

Stribbel said the meaning of the musical resonates with him on a deeper level, being a Canadian by birth and growing up in China.

The rhetoric and descriptions heard in the play are similar to what is said about immigrants in the country’s current climate, Stribbel said.

“I am an immigrant so to play this role is kind of cathartic, because I have had to read newspapers that say,‘This person said all immigrants are evil murderers who are coming to take our jobs.”

Stribbel said he wants people walk out of the show with a realization that it is not possible to just sit back and watch bad things happen.

Dillon said one of the reasons the music department settled on performing “Cabaret” was the special resonance the musical has with the present state of the country.

“The underlying content of the play is really thought provoking,” Dillon said.

“It will raise conversations about our current climate and hopefully those ideas will stay with people well beyond the immediate gratification of the show itself.”

“Cabaret” will elicit many emotions from the audience like tension, sympathy and laughter, Dillon said.

“At times they will be at the edge of their seats wondering what is going to happen next,” Dillon said.

“And at times they will feel very happy and quite sad, but when they leave they will have had a great time and have food for thought.”