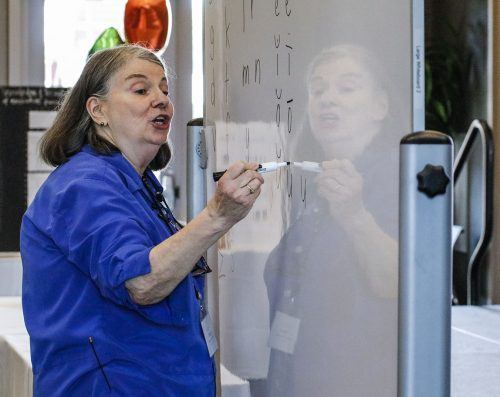 Nancy Cushen-White, a dyslexia research specialist from University of California-San Francisco, discusses dyslexia and the benefits of structured literacy during her keynote speech for the second annual Neurodiversity Symposium Sunday in the Campus Center. Cushen-White discussed dyslexia and the benefits of structured literacy, and went through all 44 phonetic sounds within the English alphabet. The conference was sponsored by the Center for Neurodiversity, Learning and Wellness. / photo by Katie Pyne

Educators, doctors and other experts on the subject of dyslexia hosted workshops on dyslexia, literacy, and teaching methods as part of the second annual Neurodiversity Symposium Sunday in the Campus Center Ballroom and various classrooms.

Niki Elliott, clinical faculty member of special education and co-director of the Center For Neurodiversity, Learning, and Wellness, began the event by saying that addressing the needs of children with dyslexia in education is a social justice issue.

“Our criminal justice system predicts the prison beds they’ll need in the next generation by the number of children in a given community who are not reading at grade level by fourth grade,” Elliott said. “60 percent of juveniles in incarceration have dyslexia.”

Nancy Cushen-White, associate clinical professor at the University of California, San Francisco and keynote speaker for the symposium, was a member of the Dyslexia Guidelines Work Group set up by California Department of Education to develop guidelines for assessment of dyslexia and educational services provided to dyslexic children in public schools, as required by Assembly Bill No. 1369.

She said that teachers often misunderstand the problems children with dyslexia face, attributing the students’ poor performance to lack of focus, and evaluating a child’s reading skill only by read words per minute, rather than by the number of words read accurately, or by how much the child understood what he or she read.

Cushen-White said that children with dyslexia often tend to perform poorly in reading, but excel in other capacities, like spoken vocabulary. They often confuse similar looking letters like “b,” “d,” “p,” and “q” not because they literally see different letters than children without dyslexia, but because the innate ability to recognize mirror images or rotated images of objects as the same object leads them to believe that letters like “b” and “d” are flipped versions of the same thing.

“Basically, you’re teaching them that, with letters, there’s an orientation,” Cushen-White said.

Cushen-White said that an essential part of teaching children with dyslexia how to read is teaching them to associate a phoneme, or the smallest unit of a sound, with a grapheme, the smallest meaningful unit in a writing system (in English, written letters). One example of a teaching method she provides is the auditory-visual-kinesthetic exercise.

Jacqueline Rice, M.S. in early childhood development, led the workshop “Teaching Children to Love Their Dyslexic Brain,” which discussed ways to develop the self-esteem of children with dyslexia. She said that children with dyslexia and other learning disabilities often have trouble learning in a traditional classroom environment. She said that those children prefer to learn by manipulating objects in their environment. For example, a child learning to count would prefer to play a game of how many rocks they can stack, and then count the rocks.

She said her understanding of how to teach children with dyslexia comes from her experience growing up with dyslexia and having children diagnosed with it.

During a break in the program, she presented books and products related to the learning styles of children with dyslexia. One of the books was “Dislecksia: The Book, Companion to the Documentary Film,” which featured interviews with children with dyslexia, and drawings that reflect their experiences.

“A child, when asked to draw a picture of her experience in school, she drew herself alone in a dark room, and that really had an impact,” Rice said. “The whole book I related to, because there were so many experiences that, time and time again, not only did I experience, but you hear from other children.”

Dr. Angela Gonzales, pediatrician and parenting specialist, led the workshop “Creating an Environment of Empowerment: Supporting Those with Dyslexia and Rescuing Their Self Esteem.”

She started the workshop by recounting her struggle to help her dyslexic son, now 19 years old, learn to read. By the third grade, the curriculum switched from lessons on how to read to lessons using written material to learn new subjects, and as a result, her son fell behind on subjects that which he previously excelled. One night, Gonzales researched dyslexia on the Internet and learned about Ronald Davis, a man who overcame his dyslexia, designed a program to help individuals with dyslexia learn to read, and wrote a book called “My Gift of Dyslexia.” Gonzales enrolled her son in a five day dyslexia correction program, and she said that in four days, he increased his reading skills by one letter grade.

“That was my saving grace,” Gonzales said. “What Ronald Davis was telling me was that, through his words from his book, ‘My Gift of Dyslexia,’ from his website, dyslexia.com, was that my child was not dumb, stupid or lazy – I knew that – but that the reason that he struggles with these things that are symbols, pictures, letters and words and sometimes numerals, is the same thing that causes his genius, his ability to problem solve in the real world, his ability to invent.”

Gonzales said that it is common for children with dyslexia to excel in visual thinking and associating a word or a letter with an image, but perform poorly in linear thinking. Such children can visualize words like “apple” or “dog,” but struggle with words like “the,” “that,” or “and.”

Douglas W. Stephey, doctor of optometry, led a workshop called “Visual Factors in Reading Development,” in which he discussed how solving vision related learning problems can make reading easier for children with dyslexia.

“Remember, reading is speech written down, but reading starts as a vision issue,” Stephey said.

Stephey said symptoms of dyslexia include headaches and dizziness while reading. These same symptoms can be triggered by visual clutter or optical illusions. Stephey recounted how a woman, after looking at a picture of razor thin black and white stripes, said she had to look away. He recommended that she try look at the image again, but through a prism and blue colored lens.