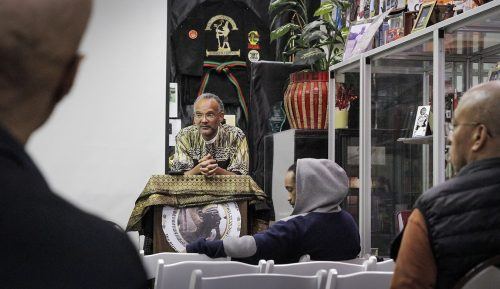 Shujaa Baker leads a discussion after a screening of the film “Pray the Devil Back to Hell” Saturday at the African American Museum of Beginnings in Pomona. The documentary depicts the Liberian civil war and the women who came together for peace. Baker focused on activist movements and the role women play in social change. This was part of Soul Cinema, a series of film screenings and discussions that focus on African American issues. / photo by Spencer Croce

The African American Museum of Beginnings showed the film “Pray the Devil Back to Hell” Saturday, closing their March series of Soul Cinema.

In honor of Women’s History month, Soul Cinema focused on the celebration of black women.

The AAMB, is a museum and organization that aims to educate the community on the hidden history and culture of African Americans.

“Pray the Devil Back to Hell” was about a group of women from Liberia who came together to end to the civil war and brought peace to their country.

Every Saturday, the AAMB hosts Afrikan Restoration Project study sessions. The study sessions are meant to educate on the expansive history of Africans and their rich culture.

The last session for this month happened to land on the last night of Soul Cinema.

Coordinator of the study group, Shujaa Baker, said that film is an effective way to convey knowledge.

“If you can find a substantial two-hour film, then that can be a very effective medium for teaching,” Baker said. “Soul Cinema is a tradition that has been in existence at the museum long before I got here.”

The film demonstrated how a women’s movement in Liberia, led by Leyme Gbowee, brought Liberia’s second civil war to an end.

“It is as I see it, one of the best demonstrations of the collective power of women that we’ve seen in the modern world,” Baker said.

Baker said it was a great way to wrap up their celebration of black women’s history because of how these women came together across cultural and religious boundaries.

“You had Muslims, Christians, and women who were into traditional African spiritual systems who came together to use the power of womanhood,” Baker said.

Throughout the movie women advocated for peace and their resilience was noticed by the president of Liberia, Charles Taylor, and rebel groups.

This resilience brought peace talks between the two groups in Ghana where the women traveled to.

The film ends with Liberia electing its first female president.

Baker said that the film ends right when things really get started for the Liberian women.

“That’s where the film cuts off, right at the point where they were demanding to have representation,” Baker said.

Azusa Pacific University alumna Alma Rahmana said the film took her through a course of emotions.

“I was angry and ready to fight, but I also felt sadness with a whole range of emotions,” Rahmana said.

The most significant part of the film for Rahmana, and what she resonated most with, was when the women were able to help nurture the children soldiers after the war was over.

“We all collectively as women have to be their mothers again,” Rahmana said. “They needed to be forgiven so they could let go of all the atrocities they committed.”

The discussion of the film led to a conversation about the natural order of things.

Executive director of the AAMB, Khalif Rasshan, told a story about a young bull elephant that killed a hippopotamus because it was not taught otherwise because its mother and father had been hunted by poachers.

“They were not taught how to navigate the environment so the natural order of things was broken,” Rasshan said.

Elephants have a very sophisticated hierarchy of teaching and learning and Rasshan said it reflects how we are as men.

Rasshan said this was something that really resonated with his soul when he first heard the story.

“That reflects our experiences because we imitate,” Rasshan said, “And if we aren’t taught right from wrong, we just do what we do.”

Baker said ultimately it was Gbowee who was the most inspiring to him.

“Her strength and character, she actually shared a Nobel peace prize and you know her work has continued,” Baker said