By Arturo Gomez Molina, Claudia Ceja on April 6, 2018 in News 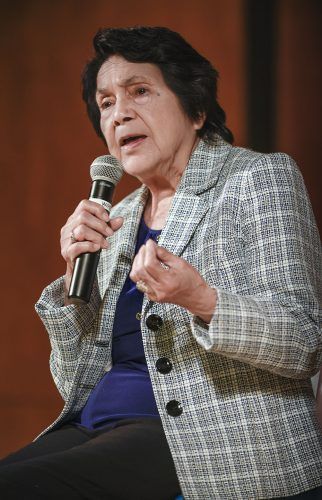 Political activist Dolores Huerta visited the university after a screening of her documentary film “Dolores” in Morgan Auditorium Mar. 29. The film was a documentary of her journey as an activist in the 1950s, fighting for the rights of Mexican American labor workers. Students and faculty in the audience asked Huerta questions about female leadership in the workplace, advice on protesting, and changes in politics over the years. / photo by Claudia Ceja

More than 250 La Verne community members gathered for a talk by human rights activist Dolores Huerta and a screening of the documentary film “Dolores” about her life, March 29 in Morgan Auditorium.

“It is an amazing feeling when you see someone who has accomplished so much in their life and they look like us,” Julissa Espinoza, interim director of the office of civic and community engagement, said.

“I hope all my women and sisters can come out today to educate themselves and feel empowered. We want to end Womyn’s Herstory Month with a bang.”

Before the screening in Morgan Auditorium, Espinoza invited 16 students of color to sit with Huerta in a conference room at the Hanawalt House for their Cafecito con Politicos series.

The series allows students to have conversations with different political figures.

Espinoza emphasized to the students that this was an opportunity to ask questions about education, personal growth or Huerta’s own personal life.

“Change is made through policy makers, and you need to remember they work for you,” Huerta said in her closing statement with the students at the Hanawalt House.

“Do not ever feel like you need to bow down to a politician. You need to remind them that you are the ones who pay their paycheck. They work for you.”

After the intimate talk with Huerta, the students shuffled to Founders Hall to find a seat for the film.

The film started from the very beginning of Huerta’s life, from her upbringing as a child, through her first marriage and when she met community organizer Fred Ross.

Huerta co-founded the National Farm Workers Association with Cesar Chavez, and was the only woman on the board of the union. The NFWA merged with the Agricultural Workers Organizing Committee to become the United Farm Workers.

Huerta founded the Dolores Huerta foundation with her children in 2002. The foundation helps set up boycotts against businesses that engage in abusive practices, among other things.

After the film, Director of Multicultural Affairs Daniel Loera introduced Huerta for a Q&A session.

“It is honestly a once in a lifetime opportunity,” Loera said. “I have never really heard Dolores’ story, but the movie truly does justice to the actions she took.”

Immigrant rights activist Jacqueline Perez, a ULV alumna, was among the first to stand up to ask a question.

Perez is part of Cosecha, a national movement that fights for undocumented immigrants’ rights across the country.

“How can we bring the community together when they feel like they have lost all hope?” Perez asked.

Huerta said Perez and the Cosecha movement needed to focus on collaborating with smaller groups at a time and bring them together to have a stronger voice.

“They can cut all the flowers but that won’t stop spring from coming,” Huerta said.

“She found a way to make her own path and that is very inspirational,” Fuentes said.

With the help of Nora Dominguez, regional campus director for the University of La Verne Bakersfield campus, the Office of Civic and Community Engagement brought Huerta to the main campus for the special screening of the film about her life.