By Anthony Carter, Dorothy Gartsman on April 20, 2018 in Football, Sports 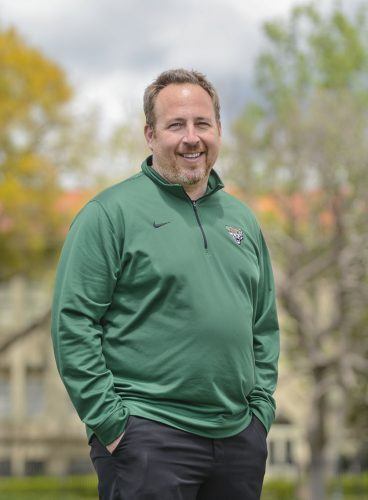 James Stewart, the new defensive coordinator for the football team, comes to La Verne with over a decade of college coaching experience. He most recently served as the defensive coordinator and assistant head coach at Chaffey College and has also coached at San Diego State and Victor Valley College. Stewart earned his associate’s degree from Chaffey, his bachelor’s degree in philosophy from Cal State Fullerton and his master’s in physical education from Azusa Pacific University. / photo by Dorothy Gartsman

University of La Verne football hopes to repeat as the No.1 defense in the Southern California Intercollegiate Athletic Conference with the hire of the new defensive coordinator from Chaffey College, James Stewart.

“We as a staff are excited to bring him to La Verne as our defensive coordinator. With his past accomplishments we were very pleased with what he has done,” head coach Chris Krich said.

The humble defensive specialist is happy to get the ball rolling at La Verne with his first week into spring ball.

Stewart grew up in Rancho Cucamonga before moving to San Diego for a graduate assistant job at San Diego State University in 2008. SDSU was Stewart’s first coaching job at the collegiate level.

Stewart, who was assistant head coach and defensive coordinator at Chaffey College, has been coaching football for over a decade and is excited to bring a new look to La Verne’s football team.

“It’s all a work in progress. We are still learning if we should run a 4-3 or a 3-4. Right now we are just teaching the fundamentals of defense, getting guys lined up,” Stewart said.

He innovated the safety position of having a defensive back play in the box similar to how Seattle Seahawks safety Kam Chancellor plays, the hybrid defensive player who can bring the big hits and drop back into coverage as well.

Before heading to La Verne, Stewart coached at San Diego State and Victor Valley College, where he was a linebackers coach.

In 2012, his first year as a defensive coordinator, he led Victor Valley’s defense to a No. 7 spot among run defenses in the Southern California Football Association.

In 2013 at Chaffey College, he led the Panthers to a No. 1 spot in the SFCA in takeaways, fourth in run defense and fifth in total defense.

With the second week of installments, players and staff like the new defense. Knowing nothing about his personnel, Stewart is being patient learning all the abilities of his athletes.

“We are focusing on the fundamentals right now, teaching stuff they have learned all the way through Pop Warner. There is an investment with the guys who are working here. They are showing promise,” Stewart said.

Players are ready to get into the grind after the first week of installments learning the new defensive plays.

“So far I kind of like the new defense that we have. He lets me play more comfortably and lets me come down into the box as a linebacker,” junior defensive back Derrin Hooks said.

Similar to former defensive coordinator Oscar Rodriguez’s defense where he ran cover two, Stewart plans to run a 4-3 defense with a change of stacking the box, dropping three defensive backs into coverage and giving more help over the top.

“For our technique as a defensive back, he is not so technical. He is more of a free range guy, trusting in our abilities and as a player I really enjoy that,” Hooks said.

Hooks, a four year starter, said he is pleased with the new schemes Stewart has introduced.

Stewart has several goals that he wants to accomplish for the 2018 season.

“First off for any coach, including myself, I want to win. I want our guys to have confidence in themselves every time they step out on the football field. Communicating throughout the game is key to success and just showing a lot of effort on the field,” Stewart said.

Junior DaeJohn Logan who switched from wide receiver to defensive back this year is ready to hop into the opposing side this upcoming season.

“I am ecstatic about this season ahead and the players believing in La Verne,” Logan said. “As a new defensive player, I look forward to all my brothers grinding everyday in practice. Coach Stewart is my new coach and we welcome him with open arms.”