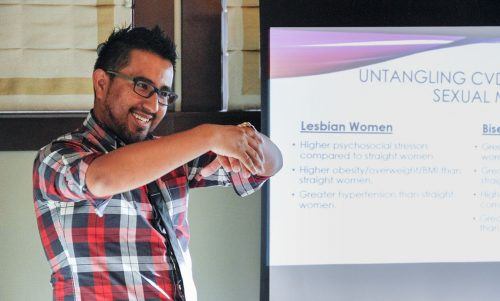 James Garcia, assistant professor of psychology, discusses how people in the LGBT community are susceptible to medical conditions other than HIV April 12 in the Hanawalt House. Garcia, along with another panelist, Megan Rush, program coordinator at University of California Riverside’s LGBT Resource Center, were brought in by the Office of Diversity and Inclusivity to present a variety of topics at the Gaypril Health Education Panel. Topics included mental health, physical health, safe sex practices, communicating in a relationship, available resources and stepping outside of heterosexual norms in relationships. / photo by Ashlyn Hulin

A group of about 20 students and faculty members gathered April 12 in the Hanawalt House for the Gaypril Health Education Panel event to learn more about health and safe sex practices within the lesbian, gay, bisexual, transgender and queer community.

The panel was part of the University’s Gaypril events, which consist of LGBT educational programming during the month of April.

The two panelists who shared insight were James Garcia, assistant professor of psychology, and Megan Rush, program coordinator for the LGBT Resource Center at the University of California Riverside.

Garcia discussed the research that has gone into cardiovascular disease and mental health in the LGBT community.

Garcia further discussed the effects of societal pressures on mental health within the LGBT community.

“Folks who identity as LGBT are forced to live in a world that sees them as socially deviant,” Garcia said.

Those who identify as LGBT are also at two to six times higher risk of suicidal thoughts and attempts than their heterosexual peers.

In fact, an alarming 50 percent of the transgender community has tried to commit suicide due to the stress of living with societal oppression and medical obstacles during the transition process. The lack of diverse medical competency training means less access to medical procedures or therapies.

“The diagnosis needed for cross-sex hormone therapy for trans folks, gender dysphoria, is listed as a disorder; in order for trans folks to have access to those hormones, they have to accept being ‘disordered,’” Garcia said.

Garcia recommends prioritizing mental health by getting involved in activism, meditating or finding supportive outlets in order to decrease stress.

He pointed out that students have access to 10 free sessions of counseling from Counseling and Psychological Services, or CAPS, at ULV.

Additionally, the Trevor Project, a toll-free confidential suicide hotline for LGBT youth, is open 24 hours a day, 7 days a week.

Rush followed Garcia’s health presentation with her own presentation called “Beyond Safer Sex: How to Put More ‘Queer’ into Your Relationship.”

The two key points that Rush made were the importance of communication in relationships and how critical it is to get tested regularly.

Above all, Rush emphasized being honest with yourself and your boundaries.

“The process of accepting differences and improving on communication isn’t linear,” Rush said.

Rush said that in this day and age, there are socially constructed ideas of what sex looks like; namely, many people perceive sex to be exclusively between one man and one woman.

“In order to dismantle this heterocentric environment, we need to defy it by engaging with politics and social media,” Susanna Bratzler, organizer of Gaypril Health Education and the parent of a gay teenager, said.

Aracely Torres, assistant director of diversity and inclusivity, who helped organize and finance the event, agreed that there should be more conversation about these issues.

“Systemically, what can we do to change things? We want change and our voices are valuable,” Torres said.

Rush said that defiance is productive, but so is communication.

“We do not communicate with each other half as much as we should,” Rush said.

“We’re already bogged down by societal pressures, so if we’re not engaging with each other, then how are we helping our partner or partners to navigate their feelings?”

Rush also stressed the importance of being proactive about sex health.

She said the best way to keep yourself safe is to get tested every month.

Getting tested should not be a chore, said Rush. Rather, she encourages making a fun day out of it and inviting friends or your partner or partners to come along with you.

“Go get tested, go to the movies, go get pho afterwards,” Rush said.

Garcia and Rush both emphasized the importance of drawing strength and support from one another, both inside and outside of the LGBTQ community, in order to improve mental health and practice safe sex.

“If you are an ally, the most you can give them is hope,” Garcia said.

The next event to commemorate Gaypril is the “Spill the Tea – Sex and Sexuality” lecture from 4 p.m. to 5:30 p.m. on Tuesday in the Campus Center Ballroom.