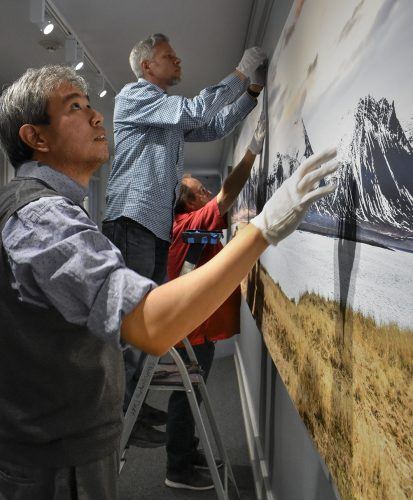 The picture was shot by Senior Adjunct Professor of Photography Art Suwansang and printed in the University’s photo lab as part of the photography department faculty exhibit, “Capture and the Seamless Stream: The Seductive Illusion of the Decisive Moment.”

The exhibition is the first group faculty show in the Carlson Gallery since “Pixel,” a joint exhibit displaying work by faculty of the photography and art departments, in 2007.

“The broad theme of decisive moment allows us to show our perception on an aspect of the genre we are most comfortable with and have an affinity for,” David Bess, senior adjunct professor of photography, said.

“There is a mythology that one can train themself to anticipate or time an exposure for the decisive moment,” Photography Department Chairman Gary Colby said. “I question whether that’s possible.”

For “Four Authorities,” Colby photographed four close up headshots of different miniature action figures and named them what he said were the most common white names: Connor, Tanner, Molly and Jake.

“They’re all white,” he said, standing five dolls dressed in police and military uniforms up on his desk. “I think that’s kind of a problem.”

He added that children grow up with the idea that authority figures are only white by playing with toys like these.

He said that to capture the large bodied, tiny headed figures he laid them down and propped the feet up, focused on the nose and photographed them overhead. He merged 60 layers of photographs to get a sharp picture and a more proportional perception.

Suwansang said that “Capture and the Seamless Stream” is one of the better group exhibits he has been a part of.

“At other schools I’ve worked at, (faculty exhibits) seem like an afterthought, something we have to do,” he said. “A lot was put into this thought process, as far as pieces being put together.”

Senior Adjunct Professor of Photography Anita Bunn said that she liked this exhibit because it was an opportunity for the faculty to show what they want and for viewers to see all the possibilities of photography.

“My current work is about how I use both analog photography along with contemporary digital techniques,” Bunn said. “It keeps me attached to (photography’s) origins while moving forward with the places it’s going in the digital world.”

Her collection features four lithographs, or negative prints exposed to sensitized aluminum plates, of photos of trees; three onto black paper with silver ink and one layered with colors. She said that it reflects the idea of how things shift and are never exactly the same even if it has been through repetition.

Bess exhibited three black and white photos of a young couple portrayed in 1940s style clothing. He said that he is drawn to that era because of the hopefulness of the unknown future post World War II.

“Capture and the Seamless Stream,” is on display through June 3.