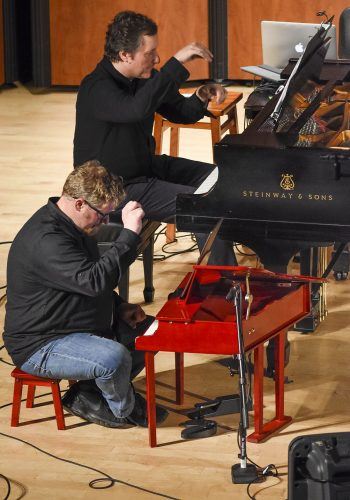 University of La Verne artist-in-residence Rafael Liebich, on the Steinway piano, and Grammy nominated pianist Aron Kallay, on the toy piano, play “Man on Wiire,” by Isaac Schankler at the “Piano(+)” concert Saturday in Morgan Auditorium. The piece is performed using an accelerometer on a Nintendo Wii controller to adjust the piano’s tone. The performance included seven pieces using pianos, recorded electronic melodies and video installations. / photo by Natasha Brennan

“Piano(+),” a piano recital that focused on electro-acoustic pieces, was held Saturday in Morgan Auditorium.

The program was presented by adjunct piano professor Rafael Liebich, and the People Inside Electronics, a concert series devoted to live electro-acoustic music in Los Angeles.

“I personally love electro-acoustic music, and whenever I can perform it I do,” Liebich said. “We are a concert series now. Each concert features a specific ensemble, one concert for voice and electronics, or piano and electronics.”

The program consisted of seven compositions, with four in the first half and the last three after a brief intermission. The pieces performed were all by composers who are still alive today, including an old college friend of Liebich’s.

“Three of them are here tonight,” Liebich said. “It’s very interesting to me to collaborate with composers that are alive.”

Tom Flaherty composed “Airdancing,” the third piece Liebich played. Flaherty and his wife were guests in the audience as well and had nothing but praise for Liebich.

All of the electronic sounds within the piece are samples of simple manipulations of a small, red toy piano, which was also on stage with Liebich as he performed.

“It was beautiful. He played it so beautifully,” Maggie Flaherty, Tom Flaherty’s wife, said. “It was a riveting, wonderful program. I especially loved the violin piece.”

The second half of the program started off with the only piece involved that had no electronics, “Mobile.” This piece was written by Liebich’s old friend from college, Michelle Agnes, and involved altering of the instrument.

“It’s like normal piano playing with professional gestures here and there, but always searching for a very unique and unusual sound that you would not typically expect,” Liebich said. “Altering the inside of the instrument in search of different sounds and different feelings… it’s something like I’ve never heard before.”

The next piece was new, and had only been performed live once before.

The piece, “Finding Breath,” was commissioned by Alexander Miller, and performed by Liebich on the piano and Alex Russell on the violin.

“I haven’t done a lot of electro-acoustic music, which was this entire concept,” Russell said. “It felt great, I have performed with Dr. Liebich a number of times. We have a great rapport and I feel like we’re able to communicate and collaborate very well.”

One piece performed, “Man on Wiire,” required the use of a Nintendo Wii controller. The piece, composed by Isaac Schankler, uses the Wii controller as an accelerometer, which electronically modulates the piano’s sound.

“There are two things happening: it’s recording and processing what I am performing,” Liebich said. “The gestures of the music that he wrote on the piano change what the program does with the recording.”

The piano piece and a device called “the patch” were designed by Schankler.

The piano has microphones inside of it, which is how the patch records what Liebich is playing in real time.

The patch then manipulates and processes what was recorded.

“There is the recording of what I am playing and then the patch sort of manipulates and processes that recording with delay, distortion, and other effects,” Liebich said. “The gestures of the music that he wrote on the piano change what the program does with the recording.”

Liebich explained that he does a lot more than just play the piano. He tries to incorporate many different aspects into not only his own performances, but those of the People Inside Electronics concert series, too.

“I do other stuff as well,” Liebich said. “I do a lot of collaboration with singers and normal ensemble… chamber music, it’s a little bit of everything.”

The next music department concert is a performance by Grace Xia Zhao at 6 p.m. Sunday in Morgan Auditorium.