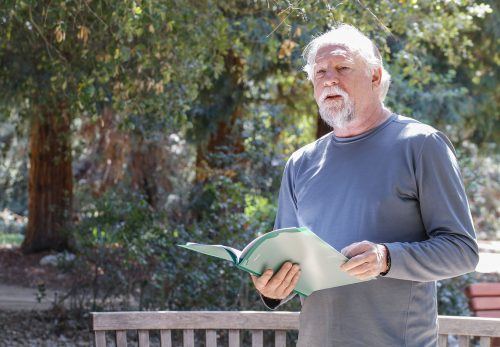 William Galasso reads a haiku about war heroes and people who have played significant roles in his life at the Rancho Santa Ana Botanic Garden’s “A Garden of Verses” event Saturday. The event invited California poets and visitors to support National Poetry Month. Galasso has been writing poetry for 50 years and haiku for 30. He has published 15 books. / photo by Katie Pyne

The Rancho Santa Ana Botanic Garden filled its fields with a myriad of poetry from authors all around Southern California Saturday.

The event, which is always held during National Poetry Month in April, was named “A Garden of Verses” and has been running for five non-consecutive years.

“The visual is what moved me the most,” Deborah Waas, Claremont resident, said. “As I listened to words coming through, to see the patches of sunlight on the bends of leaves and the bark of the trees, the gray squirrels leaping from limb to limb, hearing the birds singing and feeling the breeze, it was a visceral experience.”

The garden hosted four different groups of poets, all of which showcased a different style and approach to poetry, but the event has been known to host as many as six.

The event was organized largely by Marcyn Del Clements, who presented alongside other members of the L.A. County Poets.

Clements, who had previously only been an audience member, took over organization of the event after noticing that it did not occur per usual one year.

Clements was told that the reason for the missed year was a lack of organization.

“Well how hard could that be?” Clements said, laughing to herself and another nearby organizer.

This is the third year that Clements has helped to organize the event.

The Pasadena Poets featured poets like Sharon Alexander, Mary Fitzpatrick and Jerry Garcia, were the founding members of the first Garden of Verses event.

“The first thing I did when I started organizing the event was reach out to the Pasadena Poets,” Clements said.

The group took turns sharing the floor as they shared poems, each reader or poet playing off themes introduced in the preceding piece.

Nature, earth, seasons and the subtle pleasures of the outdoors all comprised the themes explored by the Pasadena Poets.

One of the haiku group members was William Galasso, author of 14 poetry books, who presented his original poetry to a small, shifting audience throughout the morning.

After reading two or three pieces at a time, Galasso would pause to engage the audience on the topics covered, ranging from chemotherapy to mistletoe.

“I happen to be an infant toddler teacher for babies with orthopedic impairments for the county,” Jacqueline Levine, San Gabriel Valley resident said. “So this was fascinating because the first poet that I came to knows everything there is to know about Beatrix Potter.”

Helen Beatrix Potter was a children’s book author and conservationist who commonly featured animals in her story, most notably “The Tale of Peter Rabbit.”

The Rancho Santa Ana Garden features around 2,000 California plants through 86 acres of land. It was originally established in 1927 by Susanna Bixby Bryant for her ranch in Orange County, and became affiliated with The Claremont Colleges in 1957 when it moved to its present location.

It is now the home of Claremont Graduate University’s Botany Program.

“My favorite part about (A Garden of Verses) is the way that the garden is a place of peace for people,” said volunteer manager Kathleen Noll. “When you put together art with the natural landscape in spring, when everything is blooming and growing and coming to life, it is really special.”

The garden is currently hosting “A Game of Thorns,” a Game of Thrones themed exhibition on the art and armaments of botanical warfare, which will be on display through August.