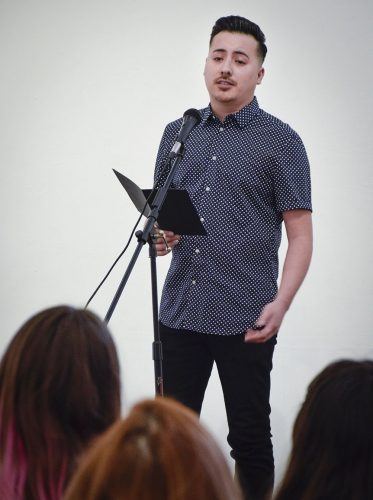 Robert Alejo, a volunteer at the Imagine Standing Up event, reads the true story of a sexual assault victim Tuesday at the dA Center for the Arts in downtown Pomona. Project Sister Family Services, a nonprofit organization that provides services to sexual assault and abuse victims in Southern California, hosted the annual event to raise awareness of sexual assault. / photo by Sara Flores

More than 40 people gathered at the dA Center for the Arts in Pomona to share and listen to the stories and experiences of sexual abuse victims.

Project Sister Family Services, a Pomona-based counseling and therapy service organization, held its annual Imagine Standing Up event at the dA in conjunction with its current exhibit, “Imagine Pomona.”

“Imagine Standing Up is about sharing stories to show what standing up for yourself really looks like,” outreach services coordinator Christina Jimenez said. “It is not just Hollywood that has had troubles with sexual abuse. It happens everywhere, every day and we need to talk about it.”

She said they share through Communicated Heartfelt and Traumatic Stories, or CHATS.

“CHATS are meant to inspire and get people into action,” Jimenez said. “If we do not talk about these issues, we will never reach an end to sexual assault.”

Before the event, organizers, guests and speakers mingled throughout the space while checking out the exhibit.

“We are gathered to continue celebrating Sexual Assault Awareness Month,” executive director of Project Sister Family Services Julie Boynton said. “It is not just celebrities who jumped onto the #MeToo movement that go through this sort of abuse. We have been helping people since the ‘70s.”

She said once they had a grant from California big enough to help up to 50,000 people.

Guests were welcomed into the dA with a reception table that had informational pamphlets about sexual abuse and blue rubber bracelets that read “Imagine Standing Up.”

“I came to learn about and get a different perspective on a subject that is not a norm in our society,” Ontario resident Brianna Voght said.

She attended the event with her mother, Tamara Renfro, to learn how to protect themselves and others.

“If I could do something to help someone and make them feel like they are not alone that would be amazing,” Renfro said. “Victims should not be embarrassed to talk about it. The more we make it a taboo, the more likely a victim will keep silent.”

Twenty four chairs were set up in the main gallery for the main presentation.

Three speakers took to the stage and told their personal stories of sexual assault. However, the stories they told were not of their own. They were three actors portraying actual victims.

“Being a woman and knowing the harassment that we go through day in and day out made me feel all in when they reach out to me to be a part of this event,” actress Leticia Perez said. “More so now than ever, speaking out about sexual assault is becoming less of a taboo, so it is important that all of our stories are shared so we can raise awareness and empathy.”

The event was wrapped up with three high school students and the organizations intern from the University of La Verne, sharing facts and statistics about sexual abuse.

After the event, everyone was invited to a smaller gallery in the back of the dA where they had set up The Healing Project.

The Healing Project highlighted four sexually abused individuals but having large headshots of them with their stories printed and framed beneath the pictures. Guests could go up to each photo and pick up headphones to listen to an audio version of each story.

Ten people filled the Healing Project in silence as they listened and read the stories of each victim.