By Hailey Helms, Natasha Brennan on May 25, 2018 in Community News, LV Life 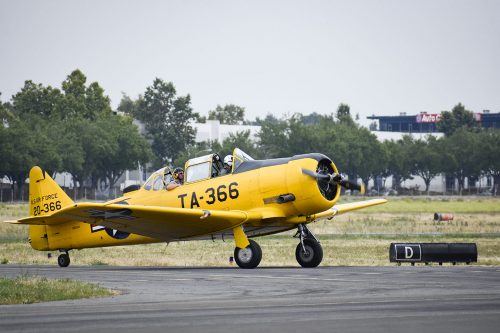 A pair of pilots take a 1952 Harvard MK IV fixed wing single-engine plane for a spin Tuesday at Brackett Field in La Verne. The aircraft, a training plane, can go 205 mph at 5,000 feet. The airport hosts an aircraft and classic car display on the third Sunday of every month. Parts of the event were canceled last Sunday because of inclement weather. / photo by Natasha Brennan

About 10 people from the La Verne community and many pilots gathered Sunday at Brackett Airport for an aircraft show and barbecue.

On the third Sunday of every month, Brackett hosts a day-long event where pilots can fly their planes down to show to the public and also hosts a barbecue for pilots and guests. The barbecue was canceled due to the rain, but the aircraft show was still hosted.
Brackett’s runway featured different models of old fashioned planes.

Showcased aircrafts included a Navion, a known classic, a Rockwell Commander created in 1978, a Beechcraft made in 1964 and a Bonanza made in 1951.

“I’ve had airplanes here for several years on this field,” Jonathan Neal, treasurer of the Brackett Airmen Association said.

“I really like this airport. It’s got a lot of room. Taking off and landing, it’s gorgeous flying out over the lake.”

Neal said the event is not only an opportunity to show off his airplane, but also a chance for guests who attend the monthly event to learn about various aircrafts.

“We try to get young people and even young kids in the cockpit of the airplane with the idea of hopefully someday they’ll be a pilot,” Neal said.

The technical aspect of the event drew many guests in.

“Everybody here is very knowledgeable about how they work and how they fly and that kind of stuff.”

McDonald explained how the Brackett Airman Association is a suitable place for any college student interested in flying.

He attended the event to be an assistant to his dad, John McDonald, a commercial pilot, aviation technician of 52 years and Marine Corps Veteran from Vietnam.

John McDonald brought a 1976 Navion Rangemaster H-model to the event.

“This plane was last made in 1976,” John McDonald said. “This is the fourth one on the line, and they only made six that year.”

John McDonald said that Navion was one of the few airplanes of its kind that actually flew to Hawaii from Oakland.

The phrase, “I flew to Hawaii,” are painted in red on the side of the plane to advertise the accomplishment.

“It is a hidden gem,” Kathy Collatin, manager of the AIA Pilot Shop at Brackett Airport, said of the airport.

“Because every now and then, we will have World War II airplanes that come in here. They put them on display. For a small fee, you can take a ride in them.”

Some pilots who visit Brackett regularly also participate in Angel Flight, which arranges free air transportation for charitable and medical related needs, as well as flying to Mexico to do charity work.

“It was really nice to see how passionate these men are about flying and listen to them talk so highly about it,” Raychle Perkins, from Glendora, said.

“I also really liked how some took the time out of their day to walk us around and give us the history of the planes.”

The aircrafts will be on display again on Father’s Day, June 17.

“I encourage anybody to come over. You can even take a tour of the terminal,” Collatin said.

“There are walls of history pictures and everything here. Then, of course, you can’t forget to come into my gift shop because I need you to.”