By Natasha Brennan, Vanessa Martinez on May 11, 2018 in Softball, Sports 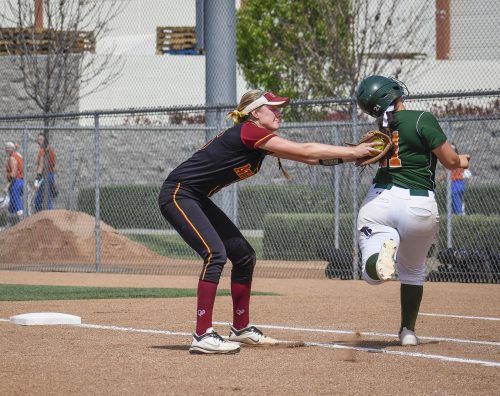 The finale was a rematch of the opening game of the tournament Friday, in which the Athenas also beat the Leopards, 2-0.

“I feel like our pitchers do their job and we have to do our job right behind them,” said head coach Julie Smith.

She said the team lacked discipline on offense.

“We had the plan and I don’t feel we stuck to the plan very well as a team,” Smith said.

Freshman pitcher Jiana Rojo was strong to start the game, putting pressure on CMS by pounding the strike zone.

“My inside pitches were definitely working for me,” Rojo said.

She said she tried to keep CMS off balance by mixing in more curveballs.

“Since Jiana has been the newcomer of the year, I think she had a lot on her shoulder when she was out pitching,” senior catcher Angelica DeAngelo said.

The Leopards had an opportunity to score in the fourth inning but could not accomplish it.

With two outs, sophomore first baseman Katheryn Navarro got on with an infield single and sophomore third baseman Justice Borden followed with a double to move Navarro to third.

“I feel like once a batter got on, we got a little too nervous and decided to allow them to lead the game,” sophomore shortstop Shelby Tevis said.

CMS took the lead in the fifth, taking advantage of back-to-back hits and a walk to load the bases.

Junior third baseman Chloe Amarilla hit into a fielder’s choice to drive in another run to give the Athenas a 2-0 lead and all the offense they would need in the game.

“I think having a more disciplined approach and stick to a plan will help us do better in the upcoming games,” said Smith.

The offense perked up again Saturday against Pomona-Pitzer and Whittier but stalled in the rematch with CMS.