By Campus Times Editorial Board, Sarah Borer on May 4, 2018 in Editorials, Opinions 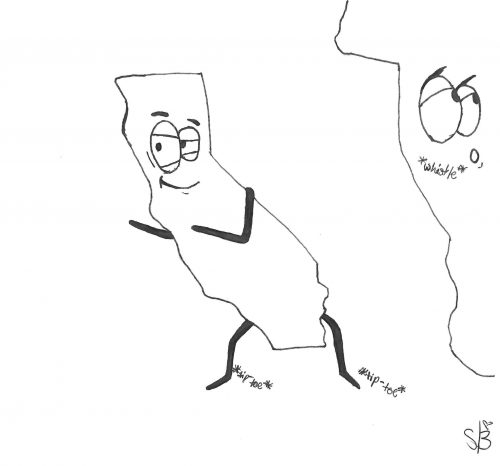 California Secretary of State Alex Padilla announced that the secession ballot proposal was cleared to gather signatures to be put on the ballot April 23. The proposal, which needs to garner 365,880 signatures, requires a special election to be held May 2021 to decide if California should secede from the union and form an independent republic. This proposal is part of a reignited effort inspired by the CalExit movement that arose shortly after the 2016 election of President Trump.

The results of a 2017 UC Berkeley poll showed that 62 percent of California voters do not support the movement to leave the Union. In any case, a state’s attempt to unilaterally secede from the Union is unconstitutional, according to Texas v. White (1869), a Supreme Court case regarding U.S. bonds that Texas owned and illegally sold during the Civil War while part of the Confederacy.

The President would simply respond to attempted secession with a military invasion in California, as he would not let the Union lose out on the wealth of a state that, according to California’s Legislative Analyst’s Office, has a GDP of $2.5 trillion.

If the movement is as left-wing in nature as Yes California Movement’s co-founder Marcus Ruiz Evans says it is, then it has a remarkable blind-spot. California has two Democratic senators and 39 Democrats out of 53 House representatives. The winner-take-all system allows all of California’s electoral votes to go toward a Democratic candidate, even when many voters vote Republican. Not only will the move give conservative areas in California relatively more power within their new “country,” it would create a gaping hole in Democratic representation in Congress. While Congress will lose only 14 Republican representatives, it will also lose two Democratic senators and 39 Democratic representatives. That loss will translate into a further shift of America’s political culture to the right, with Republicans having even more power in Congress.

This proposal is outlandish and asinine, and our government should not have even considered it, for will achieve nothing except ire from the rest of the country.