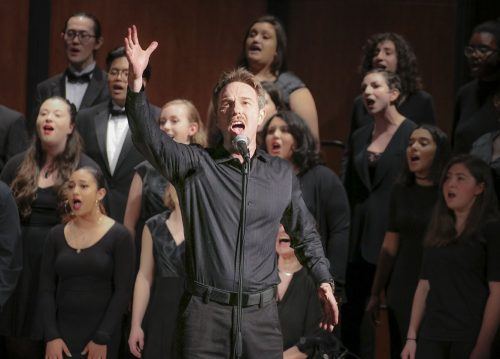 The “Inspire” concert featured performances by the University Chamber Singers and Chorale May 11 in Morgan Auditorium.

The group introduced a song from India, “Desh: An Indian Raga,” by Ethan Sperry, for which they recreated popular tunes and sounds that imitated Indian percussion instruments like the bass drum.

“When I was thinking about the program for this semester, I thought about music that I wanted to really engage the audience and the singers,” said Irene Messoloras, assistant professor of music and director of choral activity.

“The music would not only be thought-provoking, but also… inspiring.”

Messoloras conducted the show, and said that teaching her students songs of different languages and cultures helps to broaden perspectives.

“It is my privilege to work with theses incredible and talented musicians,” Messoloras said. “I wake up every day so excited to come to work because of them.”

Throughout the spring semester, the Chamber Singers and the University Chorale worked every week to learn multiple musical pieces from different cultures.

The responded with a rousing applause after the Chamber Singers performed their first foreign piece, “Hodie Christus Natus Est,” by Dutch composer Jan Pieterszoon Sweelinck, which translates to “Today Christ is Born.”

Soloist and 1998 University alumnus Ryan Harrison led the performance of “I’ll Be on My Way” by American composer and La Verne Church of the Brethren member Shawn Kirchner.

After the Chamber Singers performed six pieces, the University Chorale, composed of current students and faculty, joined the Chamber Singers and performed another six songs, including “Lamentations of Jeremiah” by Z. Randall Stroope, “Seal Lullaby” by Eric Whitacre and “O! What a Beautiful City” by Kirchner.

“It was very interesting because before we can even learn how to sing, we would have to first try to learn the words and the pronunciation,” Pepper said.

Trying to learn a French piece and quickly jumping to Indian dialect was and challenging, he said.

Junior child development major and chamber singer Alicen Bosley said that in the last year, she learned and sang in 14 different languages in the La Verne choral program.

“We do a lot of work together and it’s very extensive but it’s always fun,” Bosley said.

“It was a very strenuous process, but like all hard work, it pays off in the end,” said sophomore music major Thomas Del-Carmen said.

Terry Dopson, a coordinator of finance at the University and also an alumnus, was in the audience. He said found the performance striking. Dopson participated in the choral program when he was a student here.

“It’s really exciting to see the choir program from the audience perspective, and it is amazing how the program has grown,” Dopson said.

“The concert was so well done, I love the selection that Irene chose.”

Comic lovers gather in Claremont
End of an era