By Christian Shepherd, Maydeen Merino on May 18, 2018 in Sports, Track & Field 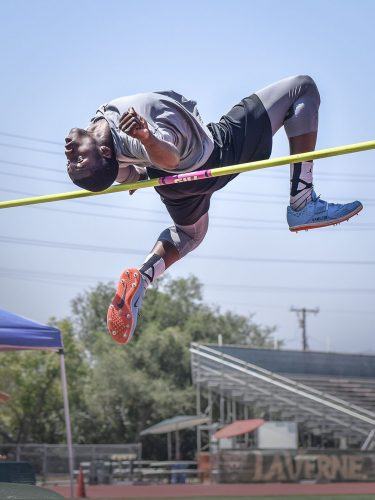 Freshman high jumper Anthony Hamilton is completing his first year on the track and field team. On April, 28 Hamilton cleared 6 feet and 7 inches in the high jump at the SCIAC Championships at Redlands. He took second place overall in the event while setting a personal record. / photo by Maydeen Merino

Anthony Hamilton, La Verne basketball player and track athlete, placed second in high jump at the Southern California Intercollegiate Athletic Conference Championships despite never having trained for the event prior to this season and suffering a knee injury requiring two surgeries throughout high school.

Hamilton, who attended Leuzinger High School in Lawndale, would have been playing basketball since his freshman year of high school had he not fractured his tibia, or shin bone, after colliding with a teammate during training camp the summer before and fracturing the same bone during his sophomore year.

Hamilton, who had undergone two knee surgeries to correct the fracture, was unable to get back on the court until his junior year of high school.

“All the people surrounding me were telling me that I couldn’t be the same player anymore,” Hamilton said, referencing his teammates and friends. “It wasn’t my family, it was the community that I was in.”

He was told if he broke his tibia a third time, he would never be able to play competitive basketball again.

Hamilton, who grew up in Inglewood and Hawthorne, two cities rife with poverty, violent crime and gang activity, was no stranger to being surrounded by a community of people battling adversity.

Approximately 21 percent of Inglewood’s population, where Hamilton spent a significant portion of his adolescence, is currently living in poverty, according to the 2012-16 American Community Survey.

Hamilton made an active decision to stay away from the influences that would have jeopardized his trajectory.

“I closed myself off from the community that I was in,” Hamilton said.

Tyler Ridley, a friend of Hamilton who will be attending ULV in the fall, is also familiar with the difficulties that the community faces.

“A lot of people who went to our school aren’t doing anything, they aren’t in school or working,” Ridley said.

“It turns bad, they end up in jail, selling drugs, getting on drugs or something negative.”

This decision was heavily influenced by Hamilton’s mother, Keisha Van Hook, who made sure her son had every opportunity to succeed.

“I didn’t want him to be out on the streets all the time,” Van Hook said. “Even now, I am calling to find out where he is.”

Van Hook worried that Hamilton might find himself in the wrong place at the wrong time.

“You see on the news almost every day, police pulling kids over, young black men…kids being killed on the streets for no reason,” Van Hook said. “I was too paranoid to let that happen. I didn’t want him to be involved in the violence.”

In 2016, there were 212 reported uses of force in Los Angeles County, the highest throughout California, according to a report released by the California Department of Justice.

Hamilton avoided the dangers by focusing on school and other activities.

“For the first couple of years, I would lock up in my room and do homework, watch TV, or play video games,” Hamilton said. However, video games and TV really only lasted until he was allowed back on the basketball court.

“The last two years of high school it was either homework or sports,” Hamilton said.

Although he was cleared to play, the threat of a third accident was still a possibility.

“I never told him, but every time he would go up for a dunk, or when someone would elbow him, it was scary for me,” Van Hook said. “He would have been heartbroken if he couldn’t play again.”

Hamilton’s dedication to school and basketball would eventually lead him to find a place on the basketball team at the University of La Verne, which he chose to attend because of its family atmosphere.

As a versatile player, Hamilton covers a variety of positions as needed, although his main position on the court is small forward.

At the end of the basketball season, Cres Gonzalez, assistant athletics director of facilities, spent more than a month recruiting Hamilton for the track and field team for high jump competition.

“I didn’t want to just be sitting around during the off season,” Hamilton said, laughing. “I thought that I’d just mess around and see where it takes me.”

As it turned out, it ended up taking Hamilton to the Southern California Intercollegiate Athletics Conference championship.

At the track meet, Hamilton placed second in the high jump event despite having never competed or trained for track and field prior to this season.

“It’s funny because in high school, high jump was never an option,” Van Hook said. “It was always about basketball.”

Hamilton had jumped the same height as the first-place competitor, 6 feet and 7 inches, but since Hamilton had taken one extra attempt, he was awarded the second-place position.

“I am going to get it for the next three years though,” Hamilton said.

Hamilton, who is currently ranked at No. 16 in the entire country, has been making steady progress in his training for nationals.

Hamilton is now jumping 6 feet and 10 inches, three inches higher than his previous week, thanks to his work ethic and additional support from University coaching staff.

“I listen to [the coaches] and put in the work,” Hamilton said. “They help me work with my form and my aggressiveness to the bar.”

The 18-year-old is currently tied for fourth of all time in the University’s record book and is looking to break the current highest record of 6 feet and 8.5 inches – a full inch and half under what Hamilton has been able to clear during practice this week.

“He was always a first one in, last one out kind of guy,” Ridley said.

Even with these records, Van Hook was not surprised with her son’s ability for high jump until she actually saw him jump for the first time.

“I don’t know where he gets that power from,” Van Hook said.

Despite his aptitude for track and field, Hamilton has no intention of slowing down his involvement in basketball.

In addition to competing for La Verne basketball, Hamilton also founded an online dunking community, Illegal Bounce, alongside two other friends in California to post videos.

The dunk community has since grown to cover the entire United States, and will be competing in London this August during the fall semester, which Hamilton does not plan on attending.

“I won’t be able to compete because school is my priority,” Hamilton said.

Hamilton also created his own clothing line, appropriately named “Defy the Odds,” which features action shots of himself mid-dunk. His inspiration for the line derives from personal experiences.

“It’s all about overcoming adversity and doing things that people say you can’t do,” Hamilton said.

The line launched May 7, after five months of working on the details.

Hamilton promotes his clothing line through social media, which he regularly updates to keep upwards of 20,000 Instagram followers on his training, achievements and endeavors under the username “Hamilton21official.”

“That is the way I keep up with him these days,” Van Hook said.

“I know he is going to be successful no matter what he does. I am very proud of him… I tell him all the time, he is living the life.”