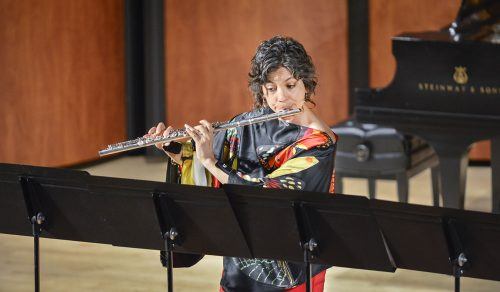 Ellen Rondina performed “Lookout,” by Robert Dick, Sunday in Morgan Auditorium. Rodina said that the composer’s innovative approach influenced her performance. Rondina demonstrated the technique before her performance, tapping her fingers on the flute to change the timbre of the notes. / Photo by Dorothy Gartsman

The performance was held Sunday in the Morgan Auditorium, and presented a show filled with both talented faculty members and students alike.

The first performance of the night was by Aaron Aranda, senior music major, and Austin Denison, senior business administration major. They performed an original, “Sonzera,” on two acoustic guitars together.

Aranda was approached by Michael Ryan, instructor of music, to perform for the Lyceum, something they have done two times before. Having usually performed Ryan’s songs in the last two performances, they wanted to do something different, so they wrote the song “Sonzera” for that night, Aranda explained.

“We actually wrote it on Tuesday, off the top of our heads. Part of it was structurally there, part of it was improvised,” Aranda said. “I thought we did it as good as we could hope for.”

Rondina explained that the performance would include a lot of “funky sounds” that the audience had probably never heard before.

“It’s very fun to do this, and easier on flutes than a lot of other instruments,” Rondina said. “There’s a lot of music written for flute and extended technique.”

The last performance of the night was given by the University Chamber Singers, which included 25 students.

The group performed two songs, “Mon-Ke-Ya” and “Hallelujah,” both conducted by Irene Messoloras, assistant professor of music, voice and chorus.

Ryan Chaney, a senior kinesiology major and tenor for the Chamber Singers, said his favorite song to perform that night was “Mon-Ke-Ya.”

“I feel like we did pretty good. We’ve been working on it all semester so at least for me, I knew everything going in and I wasn’t very worried about it. I feel like we nailed it,” Chaney said.

Chaney added that it could have been better from a musical standpoint, but he still thought they performed to their best ability.

Lawrence Potter, dean of the College of Arts and Sciences, began the show with an introduction explaining the difficult decisions regarding the financial stability of the University as the reason why the Lyceum program would no longer continue, but provided that performances by talented faculty members and students will still continue.

“Through our enrollment dips, we’ve made some decisions financially to make sure that we position the institution in such a way that we can move forward,” Potter said.

Potter ended by saying that he hopes to involve the community as much as possible.