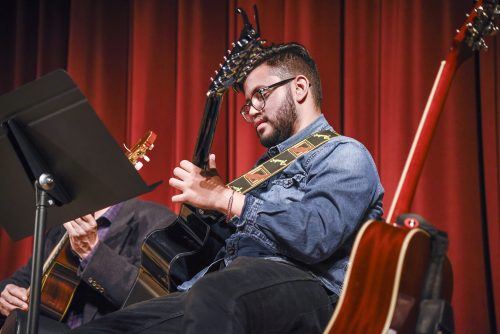 Freshman Adrian Zuñiga performs in a duet with director and music professor Michael Ryan May 18 in Morgan Auditorium. Zuñiga and Ryan performed a piece called “El Manicero,” a Cuban song from 1930 composed by Moisés Simons. Zuñiga and his classmates also performed songs from the 17th and 18th centuries. / photo by Claudia Ceja

Students in Michael Ryan’s guitar ensemble hit the high note of the semester during their recital last Friday in Morgan Auditorium.

All five students are members of Ryan’s Guitar Ensemble class, which is offered every semester. It is open to anyone who can play guitar.

“Practicing for this class has been my stress reliever for this semester,” said Petrelli.

This is Petrelli’s fourth time taking the Guitar Ensemble class.

She said that although the class can be time consuming, it is also very fun and rewarding for her.

“‘La Llorona’ was my favorite song to perform because it was the hardest to learn, but I think that we performed it pretty well,” Petrelli said.

“La Llorona,” a piece that was reminiscent of a lullaby, was among the 10 songs performed at the recital.

The other songs included some slower, more somber or peaceful songs like the traditional “Sakura,” “Mourqui” by Leopold Mozart, “Hallelujah” by Leonard Cohen and “Blackbird” by the Beatles.

Others, such as “He’s a Pirate” by Klaus Badelt, as well as some traditional pieces like “El Manicero” and “Drunken Sailor,” were more fast-paced and intense at times.

The remaining two pieces were notable in that one was an original by Michael Ryan called “Santa Fe,” and the other, “Remember Me” by Kristen Anderson-Lopez and Robert Lopez, was featured in the movie “Coco.”

“When you hear them, they really work well with guitar,” Ryan said of the eclectic group of musical pieces.

Zuñiga enjoyed learning the songs and getting to play them on two different guitars.

“The Mozart piece was really difficult, and so was ‘La Llorona,’” Zuñiga said.

He played a six-string guitar for much of the performance, but he switched to a 12-string guitar when he played “El Manicero,” a playful, fast-paced song that he performed as a duet alongside Ryan.

“El Manicero” is a traditional song that is usually played on a 12-string guitar because a 12-string produces a richer tone.

“It made me want to pick up a guitar and learn,” Alyssa Muñoz, sophomore broadcast television major, said.

Of the 30 or so attendees in the audience, the crowd’s favorite seemed to be “Hallelujah” by Leonard Cohen, which was familiar because of the University of La Verne Chamber Singers’ recent rendition of it at their concert.

The guitar ensemble recital was met with lots of applause and a standing ovation from some members of the audience at the close of the last song, “Remember Me.”

“It was music to my ears,” Muñoz said.