By Campus Times Editorial Board, Sarah Borer on May 18, 2018 in Editorials, Opinions 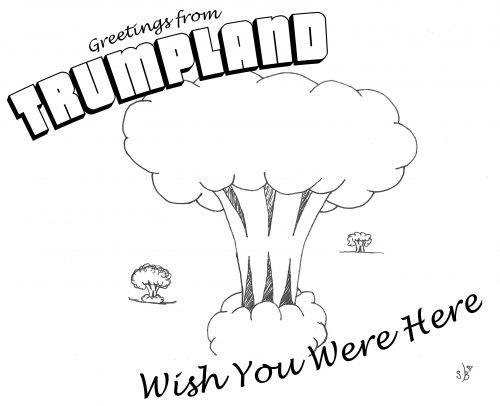 President Donald Trump announced May 8 that the United States would withdraw from the Iran nuclear deal, which he had called a “horrible, one sided deal that should have never been made.”

The deal, also known as the Joint Comprehensive Plan of Action, was agreed upon in July 2015 by the Islamic Republic of Iran, China, France, Germany, the Russian Federation, the United Kingdom, the United States, and the European Union. The JCPOA ensured that Iran did not acquire or develop any nuclear weapons, only used its nuclear program for peaceful purposes, and agreed to be monitored by the International Atomic Energy Agency. In exchange, the EU and the U.S. removed economic sanctions. The deal should have been kept in place and, by backing out of the deal, President Trump has only furthered the destabilization of the region and made the United States appear untrustworthy in the eyes of the global community.

The JCPOA was vital to keeping Iran from acquiring nuclear weapons. The deal requires Iran to keep the uranium enrichment level at 3.67 percent. Nuclear weapons need enrichment of more than 20 percent, according to the Office of Nuclear Energy. The deal allows Iran to trade resources like gas and oil with the U.S. and the EU. The deal allows for any party who thought that the other was not complying with the deal could issue a Joint Commission for resolution.

President Trump believes that the JCPOA was flawed because of its lack of restrictions on its missile program, according to a May 1 Guardian article. However, past sanctions regarding ballistic missiles are still in place, according to the Congressional Research Service. Trump’s concerns do not warrant scrapping the deal, especially when the EU wants to preserve the deal and Iran rejected the possibility of drafting a new one.

Halting of economic growth, increasing regional instability, and cultivating distrust of the U.S. in the global arena are hardly positive consequences for Trump to boast about. If he were genuinely concerned with Iran’s trustworthiness, he would have listened to his European allies and simply comply by the terms of the deal, which provided a plan of action in case any one party suspected the other of noncompliance.