By Christian Shepherd, Spencer Croce on May 18, 2018 in Arts, Etc., Feature Slider, Music 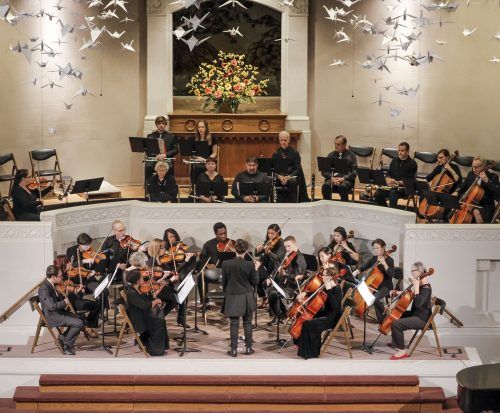 The La Verne Symphony Orchestra took an audience of more than 100 people through the ages with musicians of varying skill levels.

The orchestra, which consists of around 30 members, performed its spring concert Saturday at the La Verne Church of the Brethren, which was decorated with rows of origami swans hanging from the ceiling.

The piece was inspired by Ovcharenko’s belief of what marriage would resemble.

Ovcharenko was given a plaque of the event’s program to commemorate his music’s premiere.

Unlike many orchestras which require a certain skill level to join, the La Verne Symphony Orchestra allows players of all levels and backgrounds to be a part of the group.

“There are a lot of people who are interested in learning an instrument,” said Rachel Huang, conductor of the symphony and adjunct professor of music. “If we don’t allow them to play, then all of that talent is going to waste.”

The orchestra’s concertmaster, Jonathan Rios, junior economics major, has only been playing the violin for two years.

“I decided to start playing when I saw that there were violin lessons available,” Rios said.

Despite the varying skill levels of the orchestra members, the musicians performed songs by many notable composers, of whose lives spanned over two centuries.

“Nocturne,” composed by Lili Boulanger in 1911, was the opening duet featuring Rios on violin and Don Linde on piano.

“Concerto in B Minor for 4 Violins” featured four different violinists tackling one of the most popular sets of Vivaldi.

The symphony did not shy away from playing Beethoven’s “Symphony no. 5 in C minor,” one of the most iconic pieces of classical music literature in history.

This selection of iconic and high-level music is part of the way that Huang helps less experienced players in the orchestra improve their skills as musicians.

“Part of the reason that newer members benefit so much in this orchestra is because they are surrounded by more experienced musicians that they can learn from,” Huang said.

The orchestra is always looking for new members from the University and from the surrounding community; there is no prerequisite for joining.

“It is really great that there is an orchestra here in the community that people can come to,” said Eric Saidi, Yorba Linda resident. “I really enjoyed the performance and I think they did a great job.”