By Mark Acosta, Natasha Brennan on May 4, 2018 in Baseball, Sports 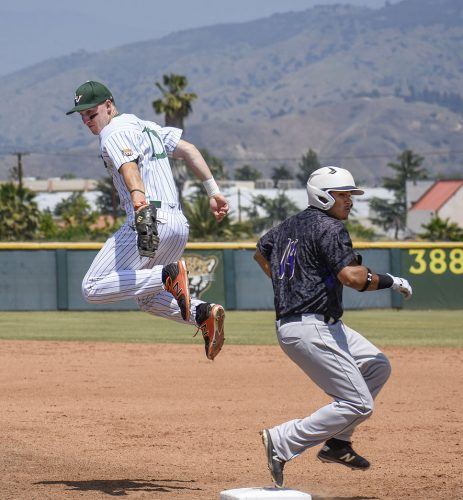 Senior first baseman Nick Michaels catches the ball mid-air as Whittier catcher Michael Angulo makes it to first during the third inning of the first game of the doubleheader Saturday at Ben Hines Field. The Leopards beat the Poets in both games on Saturday, 10-4 and 7-6. / photo by Natasha Brennan

The Leopards traveled to Whittier Friday to beat the Poets, 9-6. Then the two teams matched up for a doubleheader Saturday at Ben Hines Field, which La Verne swept, 10-4 and 7-6.

In game one of the doubleheader, the Leopards were led by senior first baseman Nick Michaels, who drove in four of the 10 runs.

“As a senior I’m just proud of this team because everyone pulled together and helped us win,” Michaels said.

On the mound, sophomore pitcher Cody Norman was solid. He went four innings and only gave up one earned run while striking out six.

La Verne’s offense got going in the third inning when senior catcher Andy Martinez got aboard on an error by Whittier junior shortstop Daniel Tuerffs.

With two outs, junior left fielder Christopher Ligot doubled to left center and drove in Martinez to make it 1-0.

After a walk by junior center fielder Brandon Vogel and a single by senior designated hitter Jakob Thomas, the bases were loaded for Michaels.

He cleared the bases with a triple to right field and gave the Leopards a 4-0 lead.

Leopard pitching kept the Poets down, with the bullpen only allowing one run in five innings of work.

The Leopards added another four runs in the sixth and went on to win game one, 10-4.

In game two, the offense wasted no time getting on the board.

La Verne scored all seven of its runs in the first inning, taking advantage of errors by the Poets.

After Vogel walked, Michaels doubled him home for the first run of the game.

Sophomore catcher Adam Santa Cruz was hit by a pitch.

Junior third baseman Lukas Granado made it to first on an error by the shortstop, scoring Michaels.

The next three runs came on singles by Guadarrama and Vogel to give the Leopards a 7-0 lead after one inning.

La Verne used five pitchers in the game, including junior Chris Peres, who finished the final four innings while only allowing one run.

“It is huge winning conference and getting to host at Ben Hines Field,” Thomas said. “This is the best team I’ve played on in my career and we play for each other.”

La Verne and Redlands finished SCIAC play with identical records of 19-5, but the Leopards won the season series against the Bulldogs, giving them the No. 1 seed in the SCIAC Postseason Tournament.

The Leopards will host the tournament this year at Ben Hines Field.

They open play against Pomona-Pitzer at 3 p.m. Friday.

Games will continue Saturday and Sunday with start times and opponents to be announced.