By Arturo Gomez Molina, Ashlyn Hulin on May 4, 2018 in Feature Slider, Softball, Sports 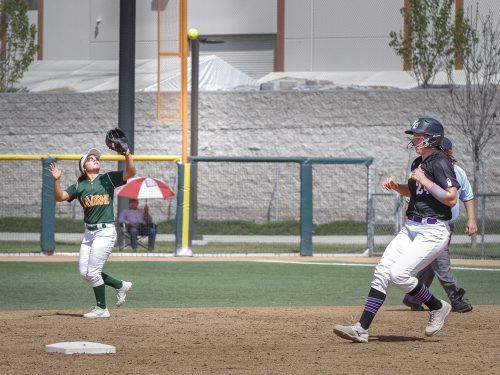 La Verne freshman second baseman Mikayla Mendoza catches the ball behind Whittier junior catcher Brittany Attaway to end the third inning of game one of Friday’s doubleheader at Campus West. The Leopards outwitted the Poets to win both games, 4-3, and 2-1. / photo by Ashlyn Hulin

The Leopards swept a doubleheader from Whittier Friday, 4-3 and 2-1, and swept Redlands Saturday, 2-1 and 4-1.

Head coach Julie Smith said she was proud how the defense and offense performed and had some parting words for her graduating seniors.

“Enjoy the moment,” Smith said. “There always going to be a lot of craziness in life, but I want them to always take time to just enjoy things in the moment.”

The Leopards kicked off senior day with a 4-3 win in game one of the doubleheader over the Poets at Campus West Friday.

The Poets struck first by getting a solo home run from senior shortstop Marialena Ahern with two outs in the top of the first.

The Leopards showed some communication problems on defense when Poets freshman third baseman Jade Sanchez ran to first, paused, then continued to second base for a double.

Whittier’s offense continued to put pressure on La Verne by loading the bases with two outs in the top of the second inning.

A single under the glove of Leopard junior shortstop Shelby Tevis gave the Poets an opportunity to get another run, and head into the bottom of the second inning up, 2-0.

The Leopards turned their game around in the bottom of the second inning with runs.

With runners on first and second and one out, the Leopards had an opportunity to even the score.

Junior designated hitter Melissa Garcia hit a ground ball straight through the legs of the shortstop and into the outfield. Both runners scored on Garcia’s double to tie up the game, 2-2.

“I knew the pitcher was throwing to me a little different, so I just waited for my pitch,” Garcia said. “The goal is to see as many pitches as I can to wait for the right opportunity.”

Freshmen pitcher Jiana Rojo faced four batters in the top of third, but Whittier’s offense was unable to score.

Tevis started the bottom of the third by putting herself in scoring position with a leadoff double.

With an RBI double from junior center fielder Carly Condon, Tevis was able to head home to put the Leopards away 3-2.

The Leopards continued through the third to try and widen the lead with runners on first and second but could not get another run in.

Rojo threw 18 pitches to Whittier’s second basemen Haley Wishner in the top of the fourth.

The two battled back and forth with multiple foul balls until Wishner was finally out with a line drive to first base.

The Poets struck back to tie up the game, 3-3, with an RBI double from junior right fielder Kacey Whitney.

The Leopards returned in the bottom of the sixth inning to put pressure on the Poets.

Sophomore third baseman Justice Borden tripled and scored on a sacrifice fly by junior right fielder Sienna Kendricks to put the Leopards up, 4-3.

“It is a little nerve-wracking when you are in a situation like that, but I always need to remind myself that I know I can hit,” Kendricks said. “It is all about keeping a positive attitude and keeping focused.”

Rojo pitched a perfect seventh inning to give the Leopards their first win in what would be four-game winning weekend.

“We showed up for every inning and it was a constant battle between both teams,” Condon said. “We have some of the best pitchers in the conference so we’re able to go up against some of these tough teams and still get the hits we need to keep going.”

The Leopards host the SCIAC Postseason Tournament this weekend, opening against Claremont-Mudd-Scripps at 2 p.m. Friday at Campus West.