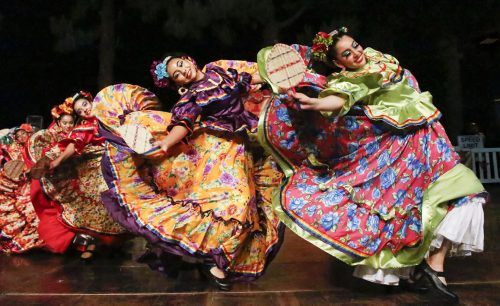 Aaliyah Chavez, Fridah Sanchez and Celine Santoyo from Tradicion Dance Company perform the Mexican folk dance, Nayarit Mestizo, at the Cinco de Mayo Festival Saturday at the KOA Campgrounds. Tradicion, located in Pomona, is home to more than 70 dancers who changed dresses for each of the five dances. Each colorful, ruffled costume is crafted for a specific dance. / photo by Tyler Evains

A celebration of an unlikely victory that took place over 150 years ago brought people together Saturday at the Fairplex’s Cinco de Mayo festival.

The day celebrates the seemingly impossible Mexican Army’s victory over French forces at the Battle of Puebla on May 5, 1862.

“I celebrate with my family every year,” Brenda Chavez, a student from Mt. San Antonio College, said. “It’s actually my husband’s birthday, but we still celebrate both because it’s an important part of my culture and who I am as a person.”

The victory is commonly celebrated with festivities like parades and festivals, cultural foods and music and folkloric dancing.

Games like corn hole and beanbag tic-tac-toe kept families entertained, along with piñatas that stretched across the open grass.

Lines of people stood at the festival’s taco stand, a favorite amongst the comfort foods.

“I love this day because it brings in such joy and happiness whether you’re from a Mexican background or not,” taco stand employee Rossanne Kaya said. “My favorite part of today is the food because it brings everyone together.”

Kaya said she was excited for people to try her carne asada tacos because they were the best.

Live music blasted as attendees danced to the beats.

“I’m enjoying myself today,” West Covina resident Stephen Ontiveros said. “The music is great, it reminds me of the music my grandpa would play.”

Ontiveros said he believes it is important that people have an understanding of the holiday and why Cinco de Mayo is so important in Mexican culture and that he dislikes seeing people use it as an excuse to go out and party.

“More people should do a little research, and at least have knowledge of what happened because such a improbable victory is such an inspiring story, and we need more of that,” Ontiveros said.