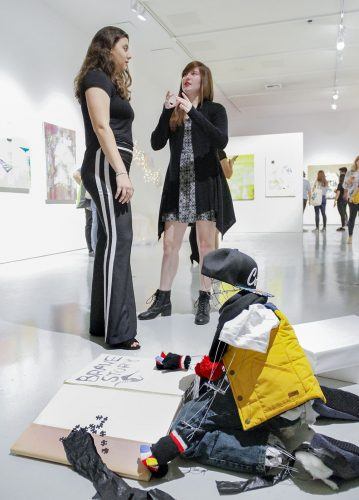 Sophomore art majors Maria Juncaj and Roiann James discuss their piece “Brave Story” Tuesday in the Harris Gallery during the opening reception for “Dancing in the Milky Way.” The installation tells the story of a boy whose book comes to life behind him, in the form of a monster. The exhibit features work from the Installation Art and Painting II classes and was curated by Dion Johnson, director of galleries, and runs through May 17. / Photo by Ashlyn Hulin

The opening reception for “Dancing in the Milky Way,” the last art exhibition of the year, showcased upper level art students’ work Tuesday in the Harris Gallery.

The exhibit, curated by Director of Galleries Dion Johnson, was a culmination of work from Professor of Art Keith Lord’s Installation Art class and Johnson’s Painting II class.

A steady crowd of visitors constantly flowed in and out of the gallery.

Upon entering, viewers are greeted by a painting of a black and pink whale donned with pink flowers kissing a teal dolphin with heart shaped purple, diamond eyes.

“They all have an abstract, spatial effect of floating and receding into imaginary space,” Johnson said.

Josh Padilla, senior studio art major, said he created the graphic element of his painting using tape on the borders of the canvas, painting over it, and multicolor, tye-dye reminiscent brush strokes in the center.

Padilla said that for the exhibit, he and the other artists had to indicate movement or imagery in their work.

“For me, it came to be an atmospheric imagery,” he said.

Freshman political science major Kiana Maria Gonzales said that the dots and ladder-like lines painted on the sides reminded her of DNA.

Padilla said that the piece was inspired by artist Mark Flood, who creates pieces by dipping lace in paint, then applying it to the canvas.

“I was experimenting with color and different techniques,” Padilla said. “I have an initial idea but sometimes during the process it changes. If I see something I don’t like, I paint over it and add another element.”

He added that he likes to create paintings that go beyond two dimensions.

The painting next to Padilla’s, by junior liberal arts major Brooke Aruffo, looks like a hill landscape with water reflecting certain elements from top to bottom of the piece.

Johnson said that Aruffo’s work has a horizon line and a sky displaying atmospheric turbulence.

“If its a landscape, its made of flavors and sounds,” Johnson said. “Both Josh and Brooke use principles of realism to create abstract paintings, so that was a good reason to put them side by side.”

A painting by senior photography major Taylor Griffith on the adjacent wall emanates a yellow aura with green intersecting lines.

Johnson said that if Tran’s installation were next to a more colorful piece, like her violet painting of a woman falling into a violet abyss, the pieces would compete with each other.

“There is a conversation in the room because the pieces interact with each other,” Johnson said.

He compared Tran’s pieces and said that the painting, on the opposite side of the room from her installation, has an emotional, weightless free fall quality.

The decorative lights in the cloud piece are much more soothing, but both are still kind of like a dream, he said.

“Installation pieces are often influenced by the space,” Lord said.

He added that for “Dancing in the Milky Way,” each installation was assigned an area and Johnson distributed the paintings near them as appropriate.

Lord said that for his students’ other three installation projects during the semester, they were challenged to find and gain permission to use different spaces around campus to display the piece.

Work in spots like the Campus Center, the stairwell in Mainiero Hall, Leo Park, Dailey Theatre and Vista La Verne were only up for as little as one day while a human-like piece stayed near the entry of the Arts and Communications Building for at least a month.

“I wanted to see if I’d get the same reaction,” Badua said.

The collaborative installation with sophomore business administration major Cesar Tapia was a street farmers’ market, complete with a human sized felt apple, blueberry and banana, a scale to measure bags of fake marijuana and a box of Jordan and Nike sneakers with leaves glued on them that read, “hella fresh produce.”

Badua gestured to what she used to mock the substance.

“It’s like an Easter egg,” Badua said. “I left the bottle of oregano under the table.”

Other installations included a display of styrofoam mannequin heads adorned with gold and black fabric sheets, one with pins stuck on the crown of the head. Further down the wall is an array of different colored hats hanging on nails in the wall. One nail was empty, where a “Make America Great Again” hat once was and now sits on a stool in front of the others.

“Dancing in the Milky Way,” is on display in the Harris Gallery until May 17.