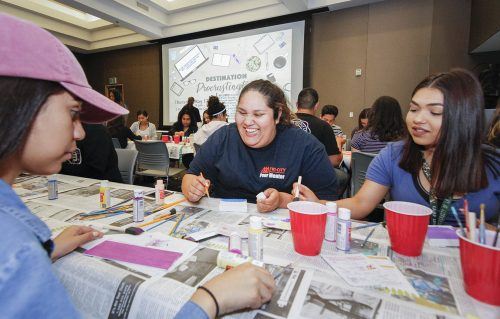 Corina Salmon, senior psychology major, paints a beach scene on a small canvas in the Campus Center Ballroom alongside her Phi Sigma Sigma sorority sisters, Jennifer Garcia, junior sociology major, and Jennifer Bogarin-Espinoza, freshman criminology major, May 17 at the Destination Procrastination event. The event, sponsored by the Campus Activities Board, entertained students with a night of various activities, music, food, and free giveaways throughout the Campus Center. / photo by Ashlyn Hulin

Students came together in the Campus Center to destress, unwind and also learn about both the negative and positive effects of procrastination on May 17.

Destination Procrastination, an event hosted by the Campus Activities Board, took over all three stories of the Campus Center, providing art therapy, drop-in tutoring, live music and even a massage room.

“It’s really about knowing what works for you and being aware of your personality type can make you feel a little more collected, put together and in control.”

Mujica, who also works for the Academic Success Center, ran the Procrastinators Anonymous booth at the event, where students were able to learn more about procrastination and get an understanding for the different types of procrastinators, while waiting in line for their “brinner,” or breakfast for dinner.

Mujica said that she identifies mostly with fear as her procrastinating trait.

“Generally, a fearful personality has an intense desire to delay, meaning in my head it’s better for me to wait versus than to just get started,” Mujica said.

Mujica said that sometimes people feel like they have less time to do something, which may normally be stressful to others, but those that don’t are able to focus better on what they need to get done.

“More time equals more chance of it being done correctly, but it could result in self sabotage as well,” Mujica said.

Students were given activity cards that, when filled out, could be placed in a raffle for prizes like Krispy Kreme gift cards and movie tickets.

Students entered the bottom floor of the Campus Center to find booths like Mujica’s, an eight-person foosball table, free food that included pancakes complete with strawberries and whipped cream for toppings, and a student lounge that was transformed into an arcade, with games like Dance Dance Revolution, which seemed to be one of the highlights of the area.

The second floor of the Campus Center had a live DJ, a bean bag room, as well as the tutoring stations inside of the Academic Success Center.

Students were invited to work on a variety of subjects, from math and science to French and history, to better prepare for their upcoming finals.

“I went to the ASC tutoring because they did a lot of study skills activities,” senior history major Adam Kane said.

Kane said he also took a few minutes with the tutors who were available at the sessions to look over his papers before he turned them in to his professors for a final grade.

To the far end of the second-story, tables were set up with games for multiple people to play.

Groups of friends played games like Monopoly, Operation and Clue.

The third story of the Center had lines of students waiting for either tarot card reading, art therapy or massages.

Inside the art therapy room were rows of tables, with students painting on the provided wooden blocks and frames.

The therapy room also had a caricature artist who is said to be one of the fasted in the world, with his 60-second caricature drawing skills.

Students lined up to get their minute-long sketches from the artist.

Inside the other half of the closed-off ballroom was the massage room, where students were welcomed in by light meditation music.

“It’s been pretty awesome so far. I am ready to play some Dance Dance Revolution,” anthropology major K’lema Burleson said.

Burleson and her friend, sophomore communications major, Jason Brandt found out about the event through social media, mainly being Instagram.

Brandt and Burleson were eager to go inside the Cash Grab, which is an enclosed, clear booth where Leo Bucks blow through the air. Participants inside try to catch as many Bucks within a limited time.

The two said that in the past, Destination Procrastination did not have as much advertising as this year which they felt was useful to the event’s success.