By Hailey Helms, Natasha Brennan on May 18, 2018 in Community News, LV Life 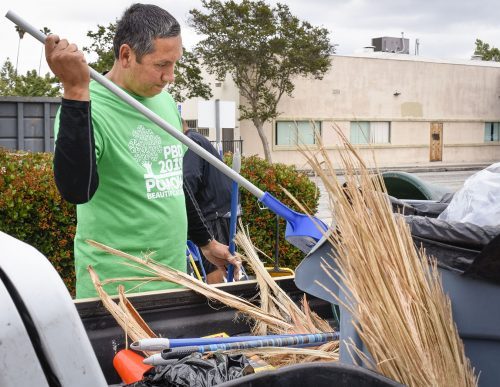 Pomona Mayor Tim Sandoval packs up cleaning supplies in a trash-filled truck at the 12th annual Pomona Beautification Day Saturday. Hundreds of residents and volunteers from the community worked together at 33 project sites from 8 a.m. to noon. Volunteers picked up trash, planted trees, helped start community gardens and created what is soon to be Pomona’s first wilderness trail. / photo by Natasha Brennan

Around 2,000 members of the Pomona community participated in the 12th Annual City-wide Pomona Beautification Day to engage in volunteer work Saturday.

Volunteers cleaned up main streets like Grand Avenue and Foothill Boulevard, as well as painted fire hydrants and planted trees and flowers to beautify their community.

The event attracted nearly 500 volunteers from Cal Poly Pomona who were joined by other nearby schools, civic organizations, city employees, nonprofits and service clubs.

The event began at the Pomona City Hall and Civic Center, where participants picked up their bright green volunteer shirts and proceeded to their designated projects.

“It’s not just a clean up,” Alfredo Camacho-Gonzalez, Pomona Beautification Day co-chairman, said. “It’s a day where people can reinvigorate their love for the city.”

Camacho-Gonzalez, 30, has been doing volunteer work since he was 16. This was the first year Camacho-Gonzalez helped plan the event and said he loved seeing his neighbors connect with strangers through the projects.

Camacho-Gonzalez said the goal of beautification day is to help people care for the community as a whole, rather than just their personal actions.

Some volunteers said they saw how small actions can drastically improve an entire community.

The impact from the community was apparent to Matthews.

“It’s actually little things like painting fire hydrants, painting curbs, planting plants and things like that. It’s so vast that it takes really an army to make a city run well, and I realized that more in depth today than I ever really did.”

“This event promotes that positive environment, that positive outlook on the community, taking pride in where we’re from,” Jimenez said.

She has participated in Pomona Beautification Day for four years, and served on the committee for the first time this year.

“I was born and raised here, so it was giving back to the community where I live,” Jerry Perez, streets and solid waste manager from the public works department, said. “I enjoy helping out with the city and just giving back.”

Perez, a University of La Verne alumnus, said he encourages students from ULV to participate in Pomona Beautification Day and contribute to their surrounding environment.

The beautification projects were completed around noon, whereafter a celebration was held at the Civic Center Plaza. All preregistered volunteers were provided with a free lunch and Los Angeles County Fair tickets.