By Mark Acosta, Sara Flores on May 11, 2018 in Baseball, Feature Slider, Sports 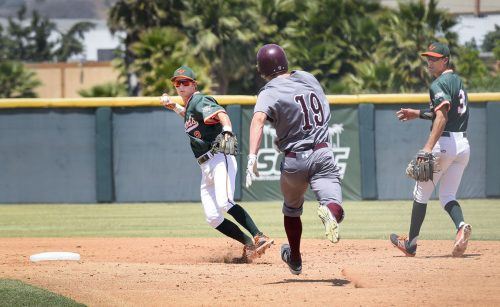 La Verne sophomore shortstop Jacob Benson throws to first base to complete a double play against Redlands in the second inning Saturday at Ben Hines Field. The Leopards faced the Bulldogs in the SCIAC Postseason Tournament, losing 10-3. In the next game against Chapman, the Leopards lost 10-3, knocking them out of the tournament. / photo by Sara Flores

The baseball team was eliminated from the Southern California Intercollegiate Athletic Conference Postseason Tournament Saturday after losses to Chapman and Redlands.

The Leopards lost each game by identical scores of 10-3 at Ben Hines Field. The losses came after the La Verne offense exploded to beat Pomona-Pitzer, 24-14, to open the tournament.

With the season now over, La Verne is awaiting to hear about a possible berth to the NCAA regionals.

Friday, the Leopards collected a season-high 23 hits to go along with their 24 runs against the Sagehens.

“We applied constant pressure and it worked in our favor,” senior first baseman Nick Michaels said. “Everyone in the lineup had a good plan and did not give away any at-bats.”

La Verne scored in every inning except the second inning. Pomona-Pitzer also put up a lot of offense with 18 hits of its own.

Sophomore pitcher Cody Norman got the start for La Verne and went 5.1 innings, only giving up two earned runs on the afternoon.

After giving up a quick two runs in the first inning, Norman shut down the Sagehens’ offense to keep them scoreless.

“I think I just stopped worrying about being nervous because it’s the playoffs,” Norman said. “I focused on keeping my team in the game.”

After giving up those first-inning runs the Leopard offense came through for Norman and got two of their own.

Junior left fielder Christopher Ligot opened the game with a sharp single through the left side.

Senior designated hitter Jakob Thomas laid down a sacrifice bunt to get Ligot into scoring position with one out.

Michaels then singled to the shortstop, and both runners advanced 90 feet off a wild pitch.

The table was set for junior right fielder and clean-up hitter Chris Peres who smoked a double to right field, scoring both runners and tying the game at 2-2.

La Verne continued to give run support to Norman, adding two runs in the third off a Peres single to left center field and a sacrifice bunt by junior center fielder Brandon Vogel.

In the fourth, the Leopards got more offense from Peres again as he smoked a single to left center field that plated two runs.

Norman kept sitting runners down. He mixed his pitches and hit his spots which made it difficult for the Sagehens to get any baserunners or hard contact.

The fifth inning was another good one for the Leopards. With two outs senior second baseman Mauricio Gudarrama walked to start the rally.

Sophomore shortstop Jacob Benson then drew another walk to get Ligot to the plate.

Ligot singled to the hole between third base and shortstop to load the bases for Thomas.

Thomas absolutely crushed a ball and over the wall in left center field for a grand slam, putting La Verne up, 10-2.

“We saw their pitchers really well,” Thomas said. “We knew we were going to have to score a lot of runs, and we did.”

Having an eight-run cushion, the Leopards seemed to have complete control of the game. But things took a turn in the top of the sixth.

Norman was taken out of the game after 97 pitches with one out in the inning and was replaced by junior reliever A.J. Jimenez.

After some hits and fielding errors by the Leopards, Pomona-Pitzer scored seven unearned runs and brought the game to within one run, 10-9.

Jimenez was replaced by junior reliever Hayden Firth who was able to get out of the inning.

In the bottom half of the sixth, La Verne’s offense answered in a big way, putting up 10 runs on eight hits.

As the Leopards scored run after run, the Sagehens look demoralized because they could not get anyone out and they made they came back and got the game to within a run after trailing big.

After the long sixth inning, the Leopards added two runs in the seventh on singles by Santa Cruz and Michaels and two in the eighth on a Benson single and a Vogel fielder’s choice.

The offense was so locked in the whole game and it looked effortless the way they were pounding pitches and scoring runs.

Pomona-Pitzer switched pitchers multiple times, but no matter who was on the mound, the Leopards were hitting balls hard.

Several Leopards had big games at the plate. Thomas finished with five RBIs and reached base four times. Michaels and Peres each went 4-for-6 and combined to bring in seven runs. Benson had three hits and three RBIs, Santa Cruz also added three RBIs.