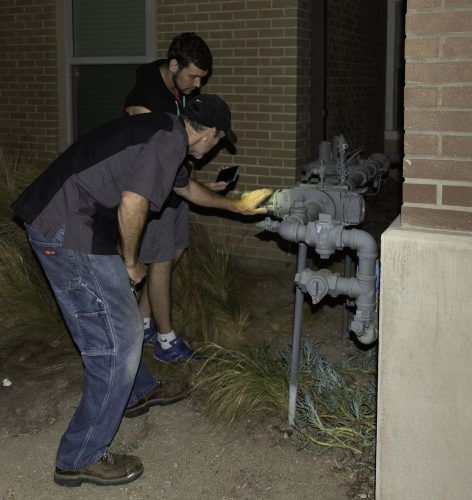 Hundreds of University of La Verne students were evacuated from their classrooms and dormitories around 7:30 p.m. Tuesday after an earthquake rattled the University, prompting a school-wide check for structural damage and gas leaks and interrupting the first session of many evening courses.

According to the U.S. Geological Survey in Pasadena, the earthquake measured a 4.4 on the Richter scale, originating near the Sierra La Verne Country Club, only three miles north of ULV.

Nina Foyabo, a freshman community advocacy major who uses a wheelchair, was stuck on the second floor of the Citrus Hall dormitory during the quake.

“I was taking a nap and I waited for [it] to pass while I just held on to my teddy bear,” Foyabo said. “It took me a while to evacuate because I had to get myself into my wheelchair.”

She took the elevator down to evacuate, but then, per University protocol, elevators were shut down in anticipation of aftershocks, preventing Foyabo from returning to her room once her dorm was cleared. 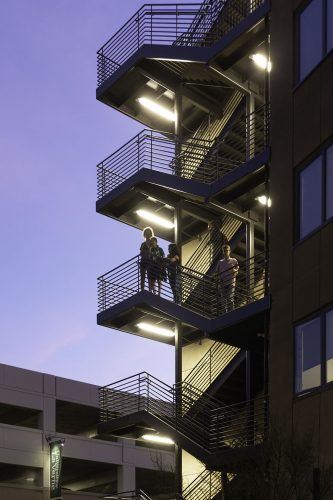 Ruby Montaño-Cordova, deputy chief student affairs officer, said that student dormitories were first on the priority list to clear for reentry, which could only be performed by ULV facilities management staff.

Campus Safety officials said that at the time of the quake only one facilities management employee was on site, although at least three more arrived on campus shortly after the quake.

In addition to manual checks for gas leaks, all natural gas systems are linked to seismic devices that University personnel can monitor. Only the Oaks D building emergency gas shut-off was triggered, a consequence of older valves that had not been braced for earthquakes.

According to La Verne Fire Department reports, both an electrical and gas line in the city were found to be damaged as a result of the quake.

“I haven’t felt an earthquake like that in a really long time,” said Jonathan Pham, senior biology major, who was sitting in his bed in Vista La Verne residence hall when the earthquake struck.

“My roommate was playing music and I thought it was his bass that was making everything crazy. Then I started seeing my hats fall off and my bed move a little bit. That’s when I knew it was an earthquake.”

Pham said that he and his roommates knew to evacuate from previous roll calls.

“I was in my education class in the Barkley Building,” said Daisy Perez, senior communications major. “We all got scared when it started shaking.”

Perez’s professor, Adjunct Professor of Education Marla Humphrey, then dismissed the class until their following meeting next Tuesday, while other professors finished reviewing their syllabi outside of the buildings or waited for their rooms to clear to resume their lectures.

Helicopters circled the skies for hours following the event while at least one La Verne fire truck was dispatched for a “windshield survey,” which involves the LVFD team driving through the city doing a visual check for damage.

Eugene Shang, director of residence life and student conduct, said he believes the housing staff’s preparedness training helped with the response to the quake, but also prompted students to prepare themselves with emergency backpacks stocked with supplies and medications should a more severe event occur in the future.

President Devorah Lieberman sent an email Wednesday with information on how access to psychological and counseling services for students and employees who were affected by the event.

“I think the earthquake spooked people,” Shang said. “But it was a reality check that we haven’t had in a while.”

Natasha Brennan contributed to this story.

Correction
Jonathan Pham’s name was misspelled in an earlier version of this story. The Campus Times regrets the error.