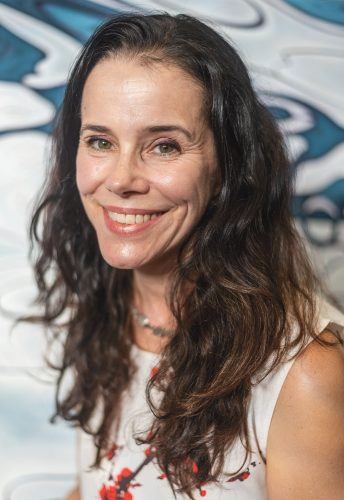 Danielle Eubank, painter and adjunct professor of communications at the University of La Verne, was nominated for the Human Impact Institutes 2018 Creative Climate Award for her dedication to painting the world’s five oceans.

The Creative Climate Awards exhibit, based in Manhattan, opened Monday and runs through Oct. 12.

The Institute features the work of artists across multiple platforms who have created climate-inspired performances, installations and exhibits in hopes to provoke action toward climate change.

“When you think about global and environmental things, you can start to feel overwhelmed. It doesn’t matter where you come from or who you are, we all have the ability to do something to support the environment,” Eubank said.

This year was described as the most competitive yet. The Institute had nearly 200 submissions from every continent with 36 artists competing for first place, including Eubank.

“I was absolutely thrilled,” Eubank said about her nomination. “One of my big drivers is that I want people to feel empowered.”

“She’s very encouraging,” said Oceano Marshall, junior public affairs major and Eubank’s teaching assistant. “She sticks with you through difficult times in the learning process and is attentive to your needs. I took away a newfound confidence in my abilities as a student because of her.”

Shelley Barry and Danielle Fox are principal partners and managing members of Slate Art LLC in Oakland, an art gallery and consulting firm. They came across Eubank on Instagram, awed by her visual presence and complexity, before traveling to Los Angeles to see her work in person.

Today, Barry and Fox represent Eubank as a client with her art on display in Slate Art.

“There is such a photographic quality to her work,” Barry said.

“She’s a lovely human being. She’s so gracious and compassionate about what she does. She’s committed to it and the bodies of water she’s painted shows that.”

Eubank began painting the world’s oceans and bodies of water in 2001, having traveled to over 22 countries to do so. She has painted the Atlantic, Arctic, Indian and Pacific oceans thus far.

Eubank created 24 cards with her artwork on one side and small actions that people can work toward to oppose climate change on the other.

“What I’m trying to do is use my art to raise, or forward, our public conversation about how it [climate change] affects us and what we can to do to play a part in combating this,” Eubank said.

Some tasks include doing laundry in cold water, unplugging unused electronics and recycling.

“Danielle has one piece from her oceans series in the exhibit and has connected it to her action cards,”said Tara DePorte, founder of the Human Impacts Institute. “She’s a great example of an artist who has done a lot of research outside of just the visuals of her art.”

The Human Impacts Institute is building connections with nonprofit organizations in hopes to guide the community on how climate change affects everyone.

“You never feel like you’re making enough difference,” DePorte said. “We’ve worked in eight cities across the U.S. and three in Europe. We want to build more and more of an international community expanding outside of New York City.”

As part of completing her “One Artist Five Oceans” series, Eubank will be traveling to Antarctica in February 2019 to paint the Southern Ocean.