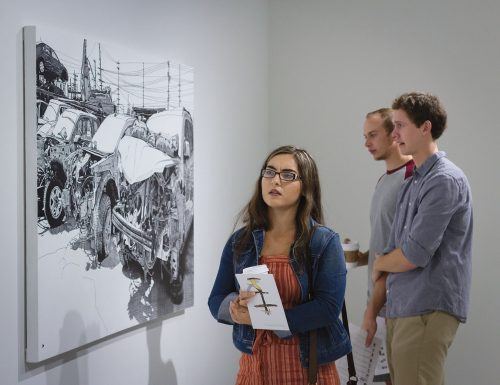 Senior criminology majors Baily Boschi and Cameron Dice and senior kinesiology major Miles Tsujimoto attend the opening reception of “Secrets for the Moon” Tuesday in the Harris Gallery. The exhibit features the work of Ichiro Irie and Lorenzo Hurtado Segovia and runs through Oct. 25. / photo by Melody Blazauskas

The Harris Gallery held an artist panel for the new exhibit, “Secrets for the Moon,” on Tuesday afternoon in the Campus Center Ballroom.

The exhibit features work from artists Ichiro Irie and Lorenzo Hurtado Segovia, who both use various mediums, such as drawing, painting and sculpture, to convey their art.

Irie said he had started out by painting people in their homes in Los Angeles. He had originally gone to school for film, and is influenced by a range of mediums such as music and video.

“I feel like at the root of my body of work, there’s some kind of narrative thread that flows through,” Irie said. “My earlier work was very much informed by cinema, and I started as a figurative painter.”

Irie uses the elements of wherever his current environment may be as material toward his work. He said that although many may not understand what he means by that, it gives him the ability to keep his work open enough to explore various materials and ideas at will.

Irie had obtained a grant to work on his art in Mexico City, where people typically thought of a painter as someone behind dreamy, folkloric work.

“The forefront of artwork over there was more in the tradition of coming from relational aesthetics… working with objects, social interventions, sculpture, performance and things such as that. But when I came back to L.A. I went to a lot of galleries and thought, ‘Oh, I’m just another painter from L.A.’,” Irie said. “I couldn’t paint anymore. Psychologically, I lost the ability to paint.”

Irie said he then started to accumulate multiple different materials to create with. His accumulation of a vast array of resources led him to a new piece created entirely out of poster putty, which is a material used typically to hang posters on the wall.

“I started making these figurative works at first,” Irie said. “It’s very much a direct relationship between me and the subject matter on a physical level. You’re actually molding the work instead of painting the work.”

In Irie’s poster putty pieces, which feature iconic rock band logos, the viewer can see the molding of his fingers, as well as his actual prints on the putty. These poster putty creations are currently on display in the Harris Gallery.

“It looks very real, you can see the fingerprints right in front of your eyes,” Sanchez said. “It makes you feel a connection to the artist, and it makes me feel like art is more attainable.”

Segovia has multiple pieces up in the gallery, including those sculpted from wood and those created using graphite and paper. Many of his wood pieces are not made of store-bought wood, but out of fallen trees.

“There is a process of drying the wood and controlling the wood so that it doesn’t crack, but it does inevitably shift form,” Segovia said. “Some of the woodworking techniques are for embellishment, and others are part of the requisite process.”

“The wood is used because, say, this piece of wood came from this tree at that time. If you went through the process the rings would tell you the kind of life the tree had,” Segovia said. “Although it’s obscure and not readily visible, it plays into the reasoning for this form and that material… This nature origin opens up a horizon for the conversation.”

He said that conversation begins with the question ‘Why am I here?’ in relation to displacement and dislocation, which was addressed in Irie’s pieces as well.

Christopher Michno, associate editor at Artillery Magazine and moderator of the artist panel, saw a relation between the two artists, regardless of the mediums used.

“I thought there was an interesting conversation here to be had between the iconographic aspect of these band logos, they suggest secret societies, and then the religious aspects of the wood carving,” Michno said.

“Secrets of the Moon” runs in the Harris Gallery through Oct. 25. The gallery is open 11 a.m.-4 p.m. Monday through Thursday or by appointment.