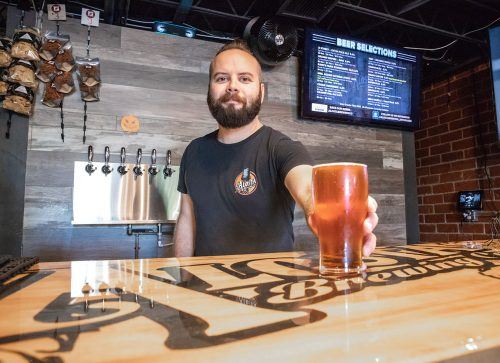 Alosta Brewery employee Iain Irvine shows off a pint of Spadra IPA, one of the brewery’s craft beers. Alosta opened last month at 2079 Bonita Ave., its second location. Alosta is open Wednesday through Sunday with different hours each day. / photo by Jaren Cyrus

Their new taproom is located in the D Street Square building. Their quaint, new hub is tucked behind Chase’s and only accessible by an entrance on D Street.

The location is small and blends in with the neighboring restaurant so you have to be careful not to miss it.

Both serve alcohol, obviously, but at a brewery, the alcohol is more of a primer for socializing and interacting than a focal point.

Bars are smaller in every meaning, filled with mostly two-top seating areas and limited walking area.

Additionally, bars are not the most group friendly, or inviting to non-drinkers who just want to socialize. The brewery atmosphere is fun, friendly, casual, and generally more conducive to overall engagement.

The craft beer boom brought a new type of social drinking into existence. Craft beer and the breweries artfully brewing removed the gluttonous aspect of drinking.

Instead of people going out to drink, they were going out to try different ales and lagers of hand crafted, small batch beer painstakingly made by the person behind the bar.

The sheer volume of variety paired with the ability to order 3-6 ounce tasters became a formula for group ordering, and beer tasting with friends.

So now drinking beer is celebrating the craftsmanship of the beer rather than the act itself, and breweries have emerged as a place to mix, mingle and sip.

Most importantly they operate during bright daylight hours and most breweries are family friendly, allowing kids, babies, and some even allow four-legged friends.

Essentially, if bars are late night kickbacks at a friends house then breweries are family barbecues.

In its move to La Verne, Alosta has lost some of that big friendly atmosphere you go to breweries for.

Unlike the location in Covina that is spacious and full of brewery favorites giant Jenga and Connect 4, it puts the emphasis back on drinking for drinking’s sake.

I could very well be misreading the vibe of the new location and they could have established this new straightforward aesthetic to let their brews do the talking and form a new haven that appeals to true lovers of their craft beer leaving their larger Covina location for the groups.

Their taproom offers the typical brewery environment in a smaller package and without the giant silver tanks as no beer is brewed on site.

The inside seating area seats maybe 10 to 12 people comfortably enough where you are not in anyone else’s conversations or bumping barstools with your neighbor every time you need to use the restroom.

My only complaint about Alosta is that they do not have their own restroom and patrons have to walk around the building to use Chase’s facilities.

On the plus side, Alosta gives patrons a few different food options. Groups can snack on inexpensive favorites like pretzels, or chips and salsa and guacamole, sold directly through Alosta.

Guests looking for something more substantial can call ahead and pick up orders from Chase’s or Fourth Street Mill.

Perhaps I have partaken in one too many cheap bottles of wine because I have seen so many ingredients lists with flavor and fragrance notes nowhere to be found on my palate (to the point I just adopted an agreeable smile and nod).

My faith was restored at Alosta, their beers were all honestly described.

The Saison Bleu, brewed with sage and ginger, was not just anointing itself as having gourmet ingredients; those flavors were there, giving it an herbal taste and aromatic feel that came together for a truly refreshing beer.

Head on over soon; the beer of the summer is currently on tap at the D Street location.

Made with their Sally Blonde Ale aged in wine barrels with strawberries for four months, the Rand’s Farm Strawberry Ale sits alongside Golden Road Brewing’s Mango Cart Wheat Ale as one of the most refreshing beers you will find anywhere.

If the inside is too crowded, there is an outdoor patio on D Street with more seating, but without any overhangs or awnings for shade, it is probably not ideal on hot days.