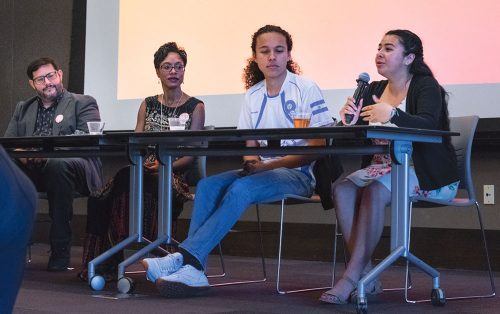 A Latinx diaspora panel of two faculty and two students discussed their cultures from Nicaragua, El Salvador, Panama and Michoacán.

The panel discussed personal narratives they have experienced balancing their culture with American customs and dealing with identity strains Monday in the Campus Center Ballroom.

The event was part of the Latinx Heritage Month festivities running through Oct. 15.

“In Southern California we have a rich culture of various people from different countries in the Latinx diaspora,” Levingston said. “Sometimes we only celebrate one culture so the purpose of this event is to celebrate additional cultures.”

Rudy Amaya, senior social justice in education major, spoke about his family from El Salvador and experience growing up as El Salvadoran in the United States.

Amaya said he grew up in the Compton area, a predominantly black and Mexican community.

“I always distanced myself from the Mexican community because there was always a response to treat me as less,” Amaya said. “The black community understood what it was like to feel like you were being treated as less, so that is why I was able to connect more with them in that sense, obviously not completely.”

Amaya said he is still conflicted with his identity when he travels to El Salvador and returns back to the states.

“Another challenge was finding my identity as a Salvadoran American,” Amaya said. “When I go to El Salvador, I am Salvadoran and when I am here in the states, I am not American, because I’m brown.”

The panel was asked if they see their culture represented on campus.

Amaya said the University has barely reached the first step of a truly diverse and inclusive campus.

“What does it mean to be an HSI [Hispanic Serving Institution], because right now our institution is still going in a way where it is still acting as a PWI [Predominantly White Institution],” Amaya said. “We have to critically think how do we get past our whiteness to get to a place of diversity and inclusivity.”

Veronica Runnels, associate professor of education and human development, spoke about her family ties in Panama and how rich the country is with different cultures.

Runnels said she also experienced people struggling to categorize her growing up because they could not grasp her identity.

“When people see me they do not assume I can speak Spanish or if they hear me speak Spanish oftentimes people are very surprised,” Runnels said. “I am African American so that is the assumption and sometimes that does not fit.”

Runnels said she now appreciates the hard experiences she went through in high school because it helped her distinguish her personal identity.

“When I was in high school and people saw my parents speaking Spanish all of a sudden they did not know where to put me,” Runnels said.

“I was called a black Spaniard, chocolate Mexican, things like that. I had a hard time figuring out where is my space, where is my place.”

Yulvi Reyes-Solorio, sophomore Spanish major, is of Purepecha descent which has a large presence in Michoacán, Mexico.

Reyes-Solorio discussed how much pride she holds when she tells people she is Purepecha.She was born in Tijuana and then moved to Logan Heights, a predominantly black city in San Diego.

She said she had to deal with people calling her a Mexican so she just assimilated to the prescribed identity from society.

“When my parents started teaching me about my culture and what it means to preserve it now that the Spanish and Mexicans are trying to conquer it, I started to realize how much my culture represents my identity,” Reyes-Solorio said.

“I decided to lean more toward telling people I am not Mexican that I am Purepecha.”

Reyes-Solorio said the Purepecha people do not rely on the Mexican government and have to fight to them to keep their lands independent. She said she finds it disrespectful when people assume she is Mexican.

“If you see me I look Mexican and speak Spanish so it is difficult for me to explain to people why we do not call ourselves Mexicans,” Reyes-Solorio said. “It is not a way to say if you are Mexican you are less, but there is value in the Purepecha people and how much the culture signifies to me.”

D’Mark expressed his concern about the lack of representation of Nicaraguan Americans.

“I had a show in 2012 and the person that put it together was Nicaraguan,” D’Mark said. “I was blown away. We started talking and one of the things we really got into was how we are marginalized. There is no Nicaraguan-American part in the U.S.”

Runnels said her family did not understand the African American experience because that was not their lived experience coming from Panama; this perpetuated struggles for her in the U.S.

“The difficulties African Americans and Caucasians were having together did not make a lot of sense to my parents,” Runnels said. “It was difficult to understand so they were not able to prepare me for that dichotomy over time and some of the microaggressive experiences I would experience.”

Runnels said she meets students on campus who have a similar history as her very rarely.

“On campus I began to see a little bit [of diversity], but sometimes it is hidden,” Runnels said. “Not everyone will talk about it depending on where they are in their journey of recognizing their Latin roots and heritage.”

Get out and vote, it’s your responsibility
Under Pressure