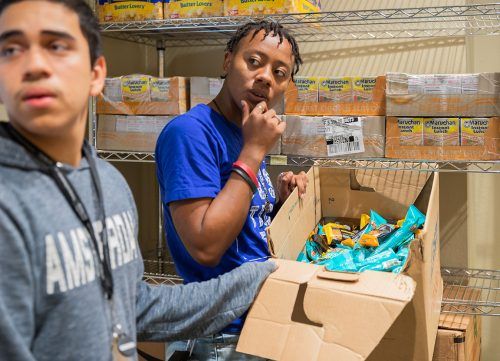 Student workers Mark Ruiz, freshman business administration major, and K’lema Burleson, junior anthropology major, organize boxes of food for the Leo Food Pantry program Sept. 19. The pantry is located in the Vista La Verne Residence Hall. Ruiz says volunteering has always been a part of who he is, so working at the pantry came naturally. He said he hopes the service on campus will help relieve some stress student’s face. / photo by Celeste Drake

The Leo Food Pantry was put in place in 2016 in response to the growing need at the University of La Verne, mirroring state and national trends in food insecurity among college students.

This year the food pantry has added a mobile food pantry – donated by the Church of the Brethren – with snacks that students can pick up on their way to class.

The pantry’s headquarters have also been relocated to the Vista La Verne residence hall.

The food pantry is available to any student on who signs up for it.

“We are here to appreciate your work and to feed you,” said food pantry student co-leader K’lema Burleson, a junior anthropology major.

When students order a box from the Leo Food Pantry, they will have the choice between a vegetarian box and a standard box, Burleson said.

The boxes include items like pasta, crackers, canned soups and vegetables, cereal bars and Pop-Tarts.

The food pantry is the work of the ULV Food Coalition, whose mission is to minimize food deficiencies and insecurities for La Verne students, Burleson said.

An estimated 11.8 percent of American households were food insecure at some point in 2017, according to the United States Department of Agriculture.

On college campuses nationwide, about 42 percent of community college students and about 36 percent of four-year university students suffered from food insecurity, according to Wisconsin HOPE Lab’s Still Hungry and Homeless In College 2018 study.

Myrna Hugo, program coordinator and office manager in the office of religious and spiritual life who works with the food pantry volunteers, said the Leo Food Pantry has about 65 to 80 sign-ups from students and about 45 to 55 monthly food pickups.

“It may have a small, humble start, but it is growing,” Hugo said. “The more we talk about it, the more people can support it in terms of funding and donations.”

“This is a private university,” she said. “Who would think that we are hungry?”

“With this job I can help relieve some stress,” Ruiz said.

“If students are not eating or getting the nutrition that they need, they are not going to do well in their classes,” Noemi Peterson, director of student accounts, said.

Students who want to sign up to receive a food box can visit laverne.edu/chaplain/student-food-pantry to fill out the request form.

Anyone who wants to donate to the food pantry can do so at the same link.