By Ariel Torres, Nicolette Rojo on September 28, 2018 in News 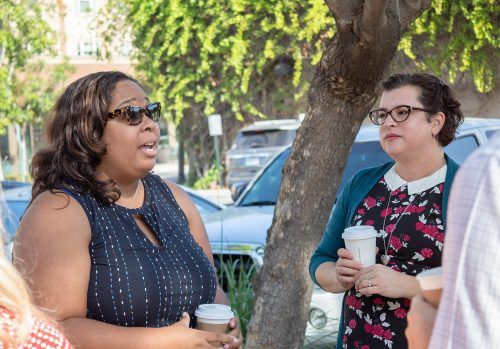 “Coffee and Networking” was part of a three-day series with Social Influencer and Communications Lead Brandi Boatner.

Boatner also held a panel discussion with faculty and alumni Wednesday, a Facebook Livestream Thursday and a networking event to have one-on-one conversations with students about careers and the public relations field.

“P.R. is really going through such a growth, an expansion and a revolution,” Boatner said. “The ride is amazing because of digital, video, content … marketing, and advertising. It’s such a fun time right now.”

Coffee and Networking took place in front of the Art and Communications building, where about 20 students got face time with Boatner.

Baird emphasized the importance of meeting new people in person before connecting online. She met Boatner at a 2017 conference and later connected with her on Twitter before inviting her to La Verne.

“You can meet somebody that’s a professional who wants to mentor and help students with their career paths,” Baird said. “Then you make that connection in person, so when you connect online, it’s easier to keep that relationship up.”

She joined IBM in 2010 and started off as an external relations professional. She was promoted to a digital experience manager in 2012 and later the social and influencer and communications lead in 2017.

The events allowed students to add another connection to their expanding networks.

Beyond making a personal connection with Boatner, the events highlighted tips and advice on how to excel in the public relations profession and make your mark in the industry.

“The biggest thing that will always stay true is talking to people, going up to people you don’t know, starting conversations and thinking about your network,” Baird said. “The technology is going to change, but the best thing you can do is learn how to talk to people and build relationships.”

Brian Clocksin, associate dean for effectiveness, planning and faculty affairs and professor of kinesiology, showed up to the event to support the communications department and share his own advice based on his conversations with Boatner.

“I think students need to explore the possibilities that are there and attend events like this so they get a chance to speak with people that are doing the work and to use those resources,” Clocksin said.

Lexi Bliss, senior public relations major and student organizer for the event, said that organizing the event and connecting with Boatner gave her insight for entering her career after college.

“From Brandi, the general advice is to do what you feel is right and go with your gut,” Bliss said. “Make sure the company shares your values.”

Bliss is also the social media managing editor for the Communications Department, and she plans on taking what she has learned and applying it to her senior project by doing a similar event.