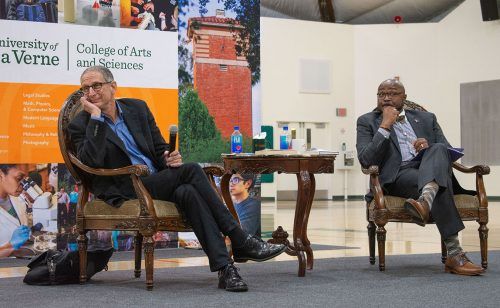 Washington Post journalist and author David Finkel takes student questions during his presentation in the Athletic Pavilion on Wednesday beside Lawrence Potter, dean of the College of Arts and Sciences. For his book “Thank You for Your Service,” Finkel spent time with veterans to zero in on how war affects the human psyche. “Thank You for Your Service” is this year’s “One Book, One University” selection. Finkel has won a Pulitzer Prize and a MacArthur Foundation Genius Grant for his work. / photo by Kayla Salas.

David Finkel spent several months in Baghdad covering the Iraq War, and even longer following some of the soldiers as they returned home and struggled with re-entry into civilian life after the trauma they experienced in combat.

Finkel, a Pulitzer Prize-winning author and enterprise editor at The Washington Post, presented two lectures on Wednesday on his book “Thank You for Your Service,” this year’s One Book, One University selection.

The first presentation was at noon in the Athletic Pavilion and drew an audience of more than 500, resulting in students sitting on the floor to hear Finkel speak.

The second, with around 50 attendees, occurred later in the afternoon at the Morgan Auditorium, where Finkel provided videos and photos to illustrate some of the points in his book.

When asked by students what could be done in communities to help veterans dealing with mental health issues, Finkel said to avoid typical sentimentality.

“Be genuinely interested in them, rather than this gooeyness that affects so many people,” Finkel said.

When strangers thank veterans for their service without knowing anything about them, many veterans find those routine gestures insincere, Finkel said.

Finkel added that the veterans feel like they are not cheering for them individually, just some “weird patriotic sentiment.”

“It dehumanizes them and turns them into what one calls ‘vet pets,’” Finkel said.

Jose Perez-Gonzalez, modern languages instructor, found the book impactful enough to use in his curriculum here at ULV and at Mt. San Jacinto College.

Perez-Gonzalez said that from what he experienced, ULV was better prepared to deal with the impact of the book’s content.

“It was very interesting to see the different reactions,” Perez-Gonzalez said. “Here, because of the One Book, One University, it was a directed cultural organized theme that students show more comfort in discussing the book.”

There are more programs and trained staff to deal with the triggering effects of the novel here at ULV, Perez-Gonzalez said.

Faculty and staff were also invited to attend a meeting to discuss strategies in diffusing triggered students and diverting that energy into healthy discussion.

“That was really great,” Perez-Gonzalez said. “We thought ahead of the possibilities that might arise because of the content.”

On Tuesday Perez-Gonzalez said he had a student act out in reaction to the novel with anger and annoyance. Despite his efforts to redirect the discussion, Perez-Gonzalez eventually had to dismiss the class for a break.

“I can see the difference in providing some kind of organized support like they did (at ULV),” Perez-Gonzalez said.

Finkel decided to follow Americans into the Iraq War for several months during what is referred to as the surge, an increase in soldier deployments by former President George W. Bush aimed at securing Baghdad.

Finkel said that he witnessed crowds of soldiers cheering when they heard the news that they would be going to Baghdad.

“In those first days, all of them had a feeling of invincibility, which lasted right until the first of them was killed,” Finkel said. “Then came a second death and a third.”

During the evening presentation, Finkel showed a video of a convoy making its way through a city. As one of the vehicles turned the corner, an explosive went off and destroyed the humvee.

“Soon their invincibility had been replaced with a soldier’s singular knowledge of what heartbreak can feel like, followed by a deepening anger, followed by a coarsening of their souls.”

The time he spent in Baghdad served as the basis for his first book “The Good Soldiers,” where he wrote about the lives of soldiers in the war.

His second book, “Thank You for Your Service,” was born from responses from veterans who had read Finkel’s work and began confiding in him.

“After the book came out in 2009, I began hearing from a lot of the soldiers who were drinking a lot, getting into fights, getting divorced,” Finkel said. “They were describing things that turned out to be symptoms of depression, suicide attempts.”

“At some point, I realized that I am supposed to be some hot-shot journalist, but I really only got half the story,” Finkel added.

Finkel said that the experiences of these soldiers formed the question that he looked to address in his second book: how do you heal from what happens to you at war?

“Trauma affects all of us in some way in some point in our life,” Finkel said. “Nobody gets out of life without having some kind of personal drama.”

“Thank You for Your Service” focuses primarily on Adam Schumann, one of the soldiers he interacted with during his stint in Baghdad.

Finkel said he learned how hard it was for a soldier to ask for help with mental health issues because of the stigma attached to the diagnoses.

“(Schumann) so wished that he had bullet holes or a broken leg or a missing leg, some representation that he was injured,” Finkel said. “As far as he was concerned, mental injury was not a real injury.”

Dan Kennan, adjunct professor of sociology, advisor for the Veteran’s Center and a Vietnam veteran, said many veterans who attend ULV are dealing with mental health issues.

Kennan said he was drafted one year into his studies at ULV and had already been involved with anti-war activity.

When Kennan returned home from his deployment, he said he dealt with post-traumatic stress disorder, inability to sleep and survivor’s guilt.

“I was a screwed up little puppy,” Kennan said after the presentation. “I didn’t want to make friends because I was used to seeing them blown up.”

Finkel said that he and Schumann found a single great truth about recovering from mental trauma.

“You either try, or you stop trying,” Finkel said.

Finkel said when Schumann finally went to the Veteran Affairs hospital to get help with his mental health issues, the woman who was filling out his paperwork missed the first time Schumann told her how many deployments he had served.

That alone was enough to confirm Schumann’s preconceptions about himself, that he was a weak man and not worth getting the help he needed, Finkel said.

Finkel ended his final presentation by prompting students in the crowd to pay attention to the issues presented in his book.

“There is less and less attention even though it is not past tense,” Finkel said. “You all inherited this war. Vietnam was mine; this is yours. The consequences are going to be around for a long time.”