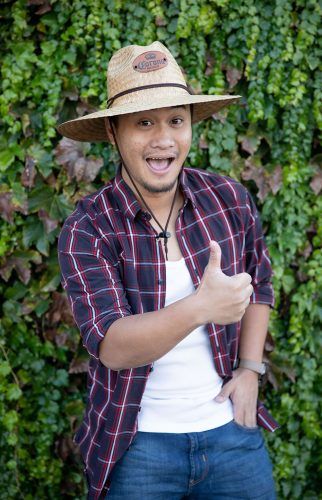 Senior biology major Jonathan Pham is taking part in wearing costumes this year for Halloween. Pham built his costume around clothes he already had in his closet. / photo by Jaren Cyrus.

With less than a week before Halloween, spooky season is creeping up on the University of La Verne, but it appears most students are winging their Halloween costume.

“My costume will be a combination of DIY and store-bought, freshman business major Noah Carter said. “I just don’t know what it’ll be yet.”

If he can think of a costume far enough in advance, senior criminology major Francisco Cerda says he can be very creative, coming up with past costumes such as the meme of Kermit the Frog sipping tea and a mariachi player.

Cerda plans to dress up as a zookeeper and go trick-or-treating with his family in search of the best candy in the neighborhoods with mansions.

“Because my family is so huge, there are a lot of young children so we like to take them out together every year,” Cerda said.

Junior education major Maeghan Carrasco is a child care assistant at Summit Intermediate and plans to dress up for the kids.

“I’m going as a basketball player,” Carrasco said. “But I think the most popular costume this year might have something to do with Fortnite.”

According to Bustle, leading the list of most searched costumes on Google this year is Fortnite and the list continues to be more unexpected with Spider Man, a unicorn, a dinosaur and a witch rounding out the top five.

Harley Quinn comes in at No. 6 on the list, which was the most searched costume of 2017.

“Cosplay is popular because people relate to the character in some way,” Pha said.

“We’re either going to be Power Rangers or Ninja Turtles,” McGary said.

“When did we decide on this,” Avila said.

Although junior broadcasting major Bronx Munoz thinks most students get dressed up because they have plans to party, sophomore political science major Madeline Ruiz said there are other ways to have a laid back Halloween season.

“If you don’t want to get dressed up, movie nights are always a great option,” Ruiz said. “You can never go wrong with pajamas, snacks, and a good movie.”