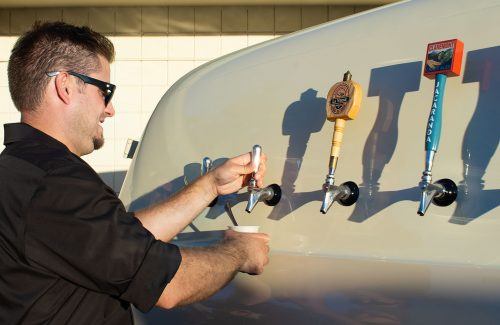 Aaron Stockham, owner of Tap Truck San Gabriel Valley, pours a fresh root beer into a cup of vanilla ice cream from Grandma Pucci’s Homemade Ice cream to make a root beer float at the La Verne on Tap beer walk Saturday. The beer walk included 26 tasting stops where participants could sample a variety of beer and food tastings from more than 40 local restaurants and breweries. / photo by Natasha Brennan

The event featured beer stops from breweries across Southern California, food stops from local restaurants and a variety of live music acts.

The event was organized and hosted by the Old Town La Verne Business Association, who were inspired by the success of the annual Sip of La Verne wine walk.

“We do a wine walk every year and we decided other cities do beer walks, so why don’t we do a beer walk?” Micky Rehm, owner of Micky’s Jewelry and commissioner of the Old Town La Verne Business Association said.

The addition of a beer walk welcomed even more La Verne residents who have never attended the wine walk.

Tickets for the event were $40 during pre-sale and $45 in the week leading up to the event. Tickets were sold in person at Micky’s Jewelry Studio and Duds and Doodads, and online through Eventbrite.

Participants in the walk received tickets for 12 four-ounce beer pours, unlimited food tastings and a commemorative glass that was used for the beer tastings.

Those who wanted to enjoy the festivities but not the alcohol, were able to purchase designated driver tickets for $20 during pre-sale and $25 the week prior to the event.

Designated drivers were able to receive unlimited food tastings, with a different colored wrist band signaling they were not going to drink any alcohol.

“Even though I’m not drinking, I think the food tasting is worth coming out and having a good time,” said designated driver Evelyn Garcia. “There’s a lot to see.”

The Old Town La Verne Business Association announced that a portion of the proceeds from the event would go to the local La Verne non-profit, David and Margaret Youth and Family Services.

“Since this was our first beer walk we scaled it down just a little bit,” Rehm said. “Next year I imagine it will be as big as the wine walk.”

Most old town businesses that participated in the walk were paired with a food vendor and a beer stop.

Although some businesses, like D Street newcomer Café Wang, only served as a food stop.

The beer walk provided a mutual benefit by bringing foot traffic to the Old Town businesses and an audience for the food and beer vendors.

“I was really excited for this event, we get to show off our Marzen which is a traditional Oktoberfest beer,” Bob Zedler of the La Verne Brewing Company said.

While all beer pours were the same size, food tastings varied wildly from vendor to vendor.

Pappas Artisanal brought back their jambalaya which received rave reviews at the wine walk and is now being added to the menu.

La Verne On Tap spread down D Street from Bonita Avenue to past Third Street with 26 separate beer or food stops and 11 live musical acts.

With the success of the inaugural La Verne on tap event organizers hope to host the event annually.