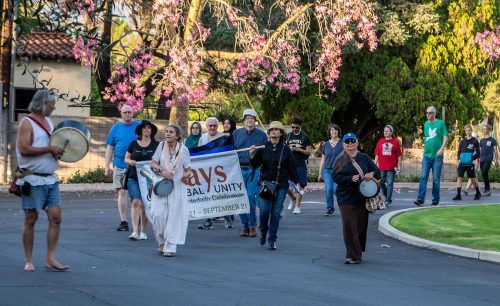 Percussionists Marcel Goedemans, Catherine Rowlee, and Sage Kahalnick lead the Interfaith Walk participants to the third stop at Temple Beth Israel on Sunday. The walk began at the Islamic Center of Claremont and moved along a route to the City of Knowledge School in Pomona, Temple Beth Israel and ended at the Claremont United Church of Christ. / photo by Veronyca Norcia

Nearly 120 people of various faiths came together in celebration of unity Sunday for the 10th annual Interfaith Walk. The walk spanned more than two miles between Claremont and Pomona and took participants through visits to Muslim, Jewish and Christian houses of worship.

The walk was hosted by the Inland Valley Interfaith Working Group who aim to promote friendship and understanding among faiths.

Bob Smith, who attends the Presbyterian Church of Claremont, has participated in the walk since it began.

“I think it’s good to push the idea of interfaith relations,” Smith said. “Muslims and Jews, Christians and other groups getting to know each other as people, as human beings.”

An activity called “Many Faiths One Future” introduced during the opening of the event served as a primer for dialogue between people of different faiths.

Small bags of beads were available, each color coded to a particular religion or belief system. In addition to beads representing Judaism, Christianity, and Islamic faiths, there were also options for non-believers or eastern religions.

Participants were encouraged to select the colored beads that best represented their particular beliefs, then trade beads with people of other beliefs.

Included in each bag was a small guide that listed each belief system with its corresponding bead color, as well as a list of questions to facilitate deeper conversations and find common ground. The goal was for participants to end the walk with beads in a variety of colors that they could then make into a bracelet.

The walk began at the Islamic Center of Claremont, where attendees met and were introduced to the event and the bead activity, and an Imam gave an opening speech.

Then the crowd crossed the street to stop by the City of Knowledge, an Islamic school that teaches kindergarten through high school in both Arabic and English.

The crowd was greeted at City of Knowledge by young students in hijabs holding crafted signs celebrating unity and peace, and volunteers handing out kebabs, dates and Turkish coffee.

As participants ate, the principal of City of Knowledge, Haleema Shaikley greeted visitors with the traditional Muslim greeting, “As-salamu alaykum” meaning peace be upon you.

She said the school opened 25 years ago to give students a better understanding of their religion.

“A religion which promotes peace, compassion and understanding,” Shaikley said.

She believes events like the Interfaith Walk are particularly important for her female students who cover their hair and encounter negative comments in public since they are portrayed negatively in the media. This event allows them to walk among other girls who have had similar experiences.

Shaikley then welcomed Ahmed Mutalib to speak. Mutalib, switching between Arabic, English and Yiddish, spoke about the lines that run between the Abrahamic religions of Christianity and Judaism, through the idea that there is universality through one god.

“Jehovah’s Witnesses call him Jehovah, we call him Allah, you call him whatever you like,” Mutalib said.

Following the speeches at City of Knowledge, a group of their high school students took maps and led the walkers on a mile-long trek to Temple Beth Israel. Those who wanted to participate in the events but chose not to walk were able to join one of the shuttles that ran along the route.

At Temple Beth Israel, participants were met with water bottles, brownies and a voter registration station. Cantor Paul Buch stood in front of the synagogue with his acoustic guitar and led the audience through hymns.

As the crowd sang along, teenagers clad in hijabs kept their phones below the pew and subtly recorded themselves trying to follow along.

The temple also shared news of their humanitarian and refugee work that addresses food insecurity.

After the jam-session in front of two 20-foot-tall statues of the stone tablets brought down by Moses, Buch toured curious guests around the temple. Along the way he shared stories of the artifacts on display that were once in Nazi Germany, but now sit at Temple Beth Israel.

As the sun set those who continued walking held their coexist flags and peace signage and began the almost two-mile walk to the Claremont United Church of Christ, the final stop of the walk and where dinner was going to be served.

Seniors from City of Knowledge engaged with inquisitive adults about traditional Muslim customs, culture and what it is like growing up as Muslims in a post-9/11 world.

A rainbow flag flew above the entrance of Claremont United Church of Christ.

Thom Browne, professor at the Claremont School of Theology and Lutheran pastor, organized the very first interfaith walk in the community, and said the event is like a family reunion for himself and some of the other group leaders. The event has gone so well, groups in Chicago and New York used this event as a model for their own walks.

For Rev. Jacob Buchholz, co-pastor of the Claremont United Church of Christ alongside his wife, said they felt proud to host the final stop of the Interfaith Walk.

“There’s just an incredible cross-section of the community who knows that even small actions like a walk around town matter because we can unite or voice something symbolic, something visual for people to know that in this world there are those that want peace,” Buchholz said.