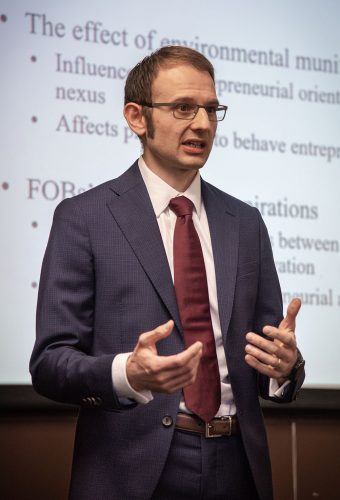 Assistant Professor of Management Giacomo Laffranchini talks about family businesses during his lecture in the President’s Dining Room Tuesday afternoon. In his lecture, “The Price Tag of Family Business Investments: Trading Entrepreneurship for Socioemotional Wealth”, Laffranchini explains his research on strategies that have a positive and negative impact on family management and capital expenditures. / photo by Claudia Ceja

He measured the performance gap and environmental munificence, which refers to the amount of resources a company has.

When a family-owned business operates with the right amount of pressure, the business can come up with optimal decisions for the business, Laffranchini said.

Laffranchini found that family-owned businesses are invested in socioemotional wealth, which are non-financial profits that only exist in family owned businesses.

The investment in socioemotional wealth affects a business’ risk-taking strategies, he said.

When a family-owned business participates in entrepreneurial activities, which are proactive risks a business takes to increase profit, they take on a “price tag,” Laffranchini said.

“The price tag refers to,under certain circumstances, investments, especially those driven by socio-emotional wealth, that do not lead to positive outcomes, but are destroyed as opposed to creating value,” Laffranchini said. “So, when family businesses make those types of investments, they pay a price for it.”

Risk taking is more serious in family-owned businesses because the owners are more invested in the business, Laffranchini said.

“A certain amount of pressure on socio-emotional wealth is necessary to temper unbridled investments with potentially negative payback,” Laffranchini said.

Al Clark, professor of humanities, said he has many business students who can learn that businesses aren’t always motivated by profit as Laffranchini mentioned.

“I was impressed by the extreme care of his research methodology,” Clark said. “He was extremely careful in the formation of his hypotheses and data groups.”

Sophomore business administration major Karlee Fink attended Laffranchini’s lecture along with Clark. She said she led discussions about Laffranchini’s research in her class.

Fink said she expected the lecture to focus on small family firms, not about the comparisons between family-owned Italian corporations and non-family-owned corporations.

Fink said she liked the idea of socio-emotional wealth and how Laffranchini’s research took a more psychological approach.

“When you are looking at firms, especially family-owned firms, there’s a lot more that has to be taken into consideration versus non-family firms,” Fink said.

Laffranchini said the paper he presented, which was published in 2017, is just one iteration of this project. He is still researching different businesses for the ongoing project.

David Gonzalez can be reached at david.gonzalez@laverne.edu.