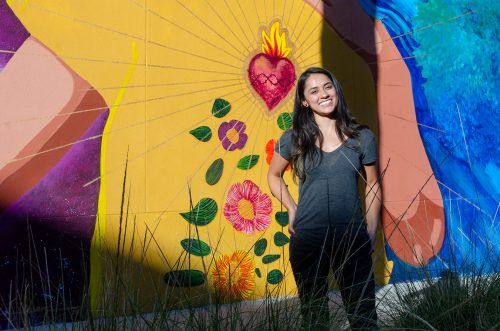 Muralist Kristy Sandoval stands next to her mural “Nevertheless… They Persisted,” on the south side of the Wilson Library at the dedication ceremony Friday. In her speech, Sandoval discussed the reason for including the sacred heart in the piece. She said it stands for the transformative power of divine love, which she chose as a symbol of the love and the beginnings of the University and its diversity. / photo by Katelyn Keeling

The University of La Verne honored the new mural “Nevertheless…They Persisted” with a reception and dedication on Friday to commemorate the work of artist Kristy Sandoval and honor alumna Dolores Gonzales.

Gonzales, whose face has been added to the mural, said she was honored to receive such recognition.

“Our grandmother has always pushed and encouraged us to our highest ability,” her grandson Nathan Gonzales said.

“She inspired us by getting her doctorate at an older age and to never stop persisting.”

He said his grandmother had always been an inspiration to him growing up.

She was a lifelong educator who also worked as a student-teacher field supervisor through ULV.

“She took pride in being a teacher here at La Verne and for the community to take pride in her is humbling to me,” Simelsa added.

Jon Leaver, professor of art history, said the mural was funded by the Pasadena Art Alliance.

President Devorah Lieberman said three other murals will eventually go up around campus.

Senior psychology major Damairis Lao read a poem tied to the theme of the mural.

Leaver unveiled the plaque dedicated to the mural during closing statements.

Sandoval said she has been working on murals for 10 years and is inspired by women’s empowerment and artist activism.

Students helped with beginning the mural in a community day event led by her assistant, Joceyln Rosearias.

“The mural was for the student body, inspired by the stories they wanted to tell,” Sandoval said.