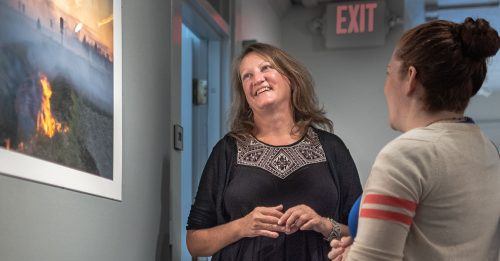 Photographer Christine Carr speaks to Heidi Marie, a former student of Carr’s at Hollins University in Virginia, about her photograph “Prescribed Burn at John’s Farm, Iowa” during the Oct. 4 reception for her exhibit “In The Air” in the Carlson Gallery. Carr’s photographs show events in which airborne particles are ejected in the air from fires, smog and agricultural practices all over the United States. The exhibit runs through Oct. 21. / photo by Claudia Ceja

Photographer Christine Carr showcased her passion for environmental awareness and photography at her “In The Air” exhibit Oct. 4.

“In The Air” showcases how airborne particles, especially man-made particles, float through the air and contribute to pollution. The photographs in the exhibit portray wild fires, harvests and intentionally set fires releasing particulates into the air.

“There’s a lot of things I’m investigating with this project,” Carr said. “How things float and move through the air, how heavy they are, where do they go, how we can see them and the patterns they make.”

Carr said that it was a challenge to make the photographs unique. She said she was able to achieve this by showcasing the effects of pollution with dead birds and vacuum filters.

“I like the idea of the bird,” Carr said. “It is something else that pollutes the air, but also, as a metaphor for life and death and what air pollution can do.”

Carr said she focuses on human elements in her photographs while also making people appear small.

Carr described her frustration with using three cameras as difficult, as they produced images of varying quality and size. Carr said she was also frustrated with being stopped by authorities as they disrupted her work.

Carr’s exhibit has been in the works since 2015 and she received a grant from Iowa State University in 2016 which allowed her to further the project.

“The grant allowed me to go to different regions of the country to photograph,” Carr said.

Carr has traveled to Texas, Louisiana and California since receiving the grant.

Carr said she used websites to track active burns while in California.

“Any time I see smoke, I start driving to it immediately,” Carr said.

Carr said she hopes her exhibit inspires people in even the slightest way.

“If anybody sees it and decides to vote, or look into it more, or do work like this, or get inspired in any way, then that would be fantastic,” Carr said.

“When we set out to select an artist, we had no preconceived notions of what we were looking for,” Sandler said. “We just wanted the artist to be brilliant. I’m happy to say we succeeded with that mission. We wanted it to be a memorable and unique exhibit.”

Sandler said Carr stood out among other artists because there was an important message to go along with her beautiful photographs.

“It spoke of protecting the environment and nature,” Sandler said. “So, to me it wasn’t just about beautiful images, it was also about a greater message.”

Art Suwansang, visiting instructor of photography, said he liked the photographs portraying vacuum filters and dust rags, describing the photos as having a three-dimensional quality.
“It captures the particulates in an interesting and compelling way,” Suwansang said.

Carr’s exhibit will be in the Carlson Gallery through Oct. 21.

The next upcoming exhibit is titled “Subcultural Spotlight” and will be held in the ground floor of Miller Hall.

Student photographers will be presenting photographs of different individuals and how they decide to represent their own culture.

The exhibit will be contributed to by students within the photography department, and has a projected opening date of Nov. 5.